BREXIT will unnecessarily hurt shoppers in the UK and EU unless governments recognize that prices of different products don’t necessarily move together and that inflation doesn’t necessarily cause growth.

The nature of inflation changed years ago. For example, shoppers know that some prices they pay are increasing and some are decreasing. Today’s consumers don’t buy more now in anticipation of higher prices in the future. This new reality will complicate international trade negotiations, particularly the transition to BREXIT.

In the Euro area, consumers have enjoyed low average price increases over the past few years; often buying more as prices fell. This defied the European Central Bank’s (ECB) expectations that rising prices over time are needed if purchases are to grow. Thus, the ECB reacted to the perceived danger with aggressive monetary medicine. 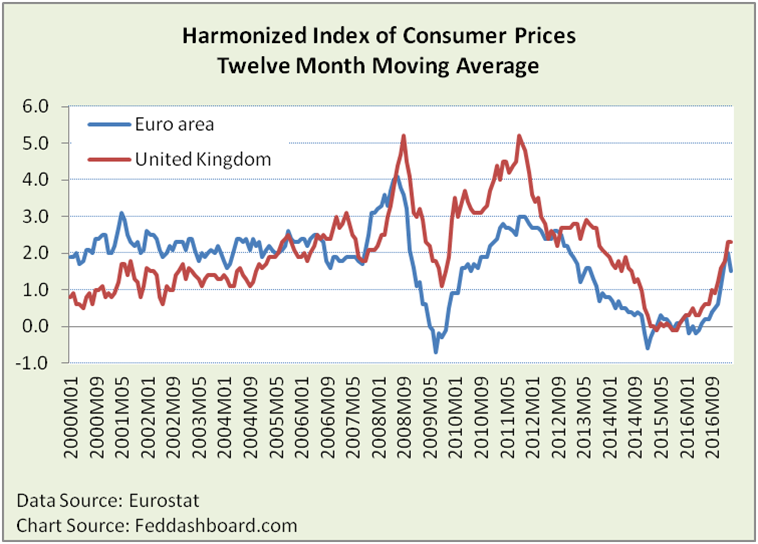 Are these increases similar across all products or more specific? They are specific. In the UK, fuel is up 42%, passenger travel by road is up 9.4%, books and fish are up nearly 9%, and beer is up 5.5%. By contrast, prices are down for air travel, natural gas, soft drinks and mineral water, and electronic-related products.

The table below shows differences in product price percent changes from March 2016 to March 2017. Below, we’ll explore data that show typical views of inflation are mostly myths.

Few products are similar in both currency areas, such as water supply, repair of home appliances and autos, and games. There are also differences within Euro area countries.

Thus, Myth #1: “Inflation” is not a single number. It is an average that hides the dramatic differences in products. In addition to different period-to-period changes, product prices also behave differently.

In the Euro area graph below, the green, red and blue lines near the top are energy products. The lines with dramatic swings are clothing with two seasons per year. Products with falling prices are mostly tech-related. Notably, regulations in Euro area countries have kept product prices from falling as much as in the UK. The UK picture shows more dispersion and the U.S. shows even more — especially falling prices.

The spread of prices is striking. An average “inflation” percent hides these dynamics. 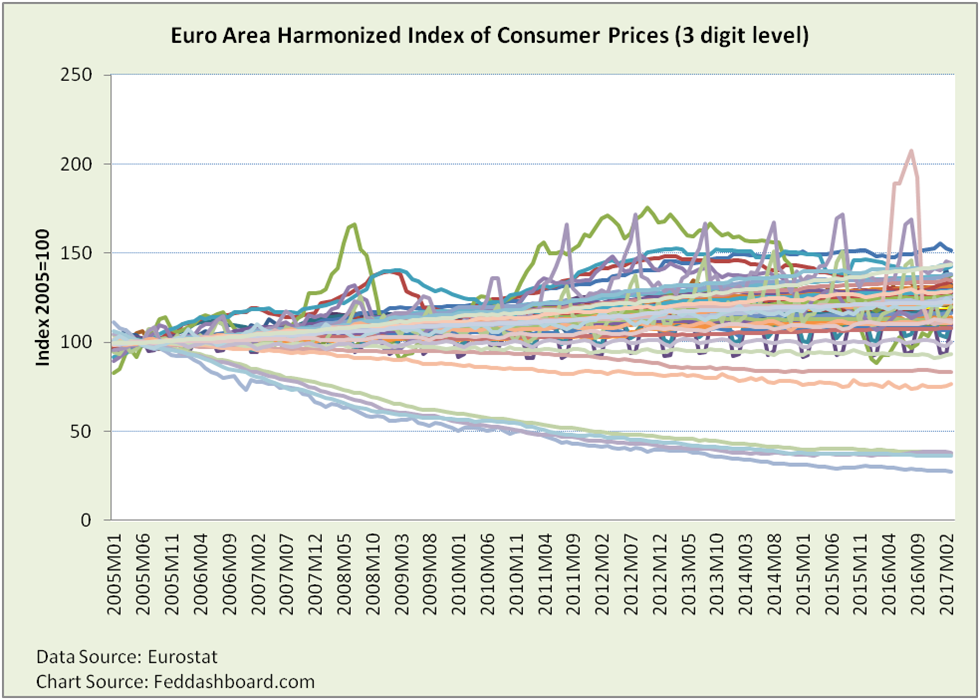 Implication of Myth #1: The quest for a “2% inflation target” is an illusion; there is no consistent path of prices.

Inflation is the price change due to monetary causes – money in circulation and interest rates – as in “too much money chasing too few goods.” For this to happen, people need to be excessively spending (rather than saving) and stores have ongoing product scarcity. Those assumptions are increasingly untrue in today’s world of abundance of manufacturing and scalable services, and global cash glut.

As seen in the table and graph above, reasons for stark differences also include:

Striking are country differences in how regulations have deprived shoppers of the price benefits from the tech and trade transformation. To see this, compare analyses in the U.S., European and Asian sections of Fed Dashboard & Fundamentals. UK consumers have the post-BREXIT opportunity to benefit by importing from the U.S. where the average price of goods has been falling for over 20 years. In the UK, the average price of goods was falling until 2006, and then sharply turned up.

Implication of Myth #2: People should look to parliaments as much or more than central banks for stable prices.

Myth #3: “Inflation” doesn’t magically grow purchases per person. Often, it is the opposite; as discussed previously — shoppers tend to buy more when prices fall

In addition to distorting prices and purchases, the inflationary policy also distorts incomes. This is because central bank-driven price increases tend to benefit those sellers and workers who are most protected from competition. This includes people protected by regulatory barriers (such as licenses for accountants or plumbers) and with more negotiating power within their supply chains.

The potential for these distortions is the central bankers’ “inflation trap.”

Implication of Myth #3: QE has more ways to distort than to grow purchases per person.

Each of these “myths” might seem obvious to shoppers, but central bankers’ often miss each one; thus, their actions too often hurt people.

To avoid harm to the purchasing power of people in a pub, UK and EU governments can:

Central bankers respond that they must seek a 2% average price level increase so they can use their interest rate tools to manage the economy and cut debt through inflation.

Yet, they face further complications:

Complications to central bankers can become painful distortions to consumers, savers and businesses.

Leverage – who’s got it in Brexit negotiations?

Germany’s double trouble from the ECB