Trending
You are at:Home»Money & Prices»How the Fed’s 2% target created their inflation trap and hurt our growth

The two percent inflation target is an illusion, ignoring the fork between goods and services. Chasing a 2% target creates a trap that distorts prices and purchases – and hurts growth.

Headline “inflation” is typically reported as both the “core,” excluding food and energy that fluctuate more widely; and then food and energy. It seems a simple picture… 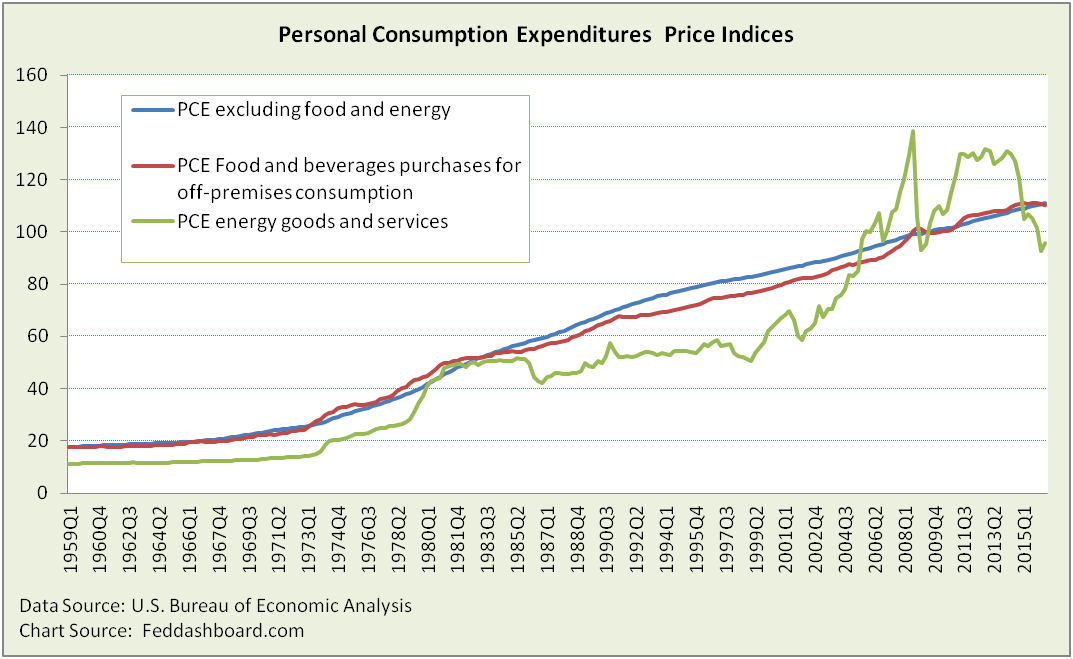 … except that it is misleading. Among many criticisms, two need more attention: 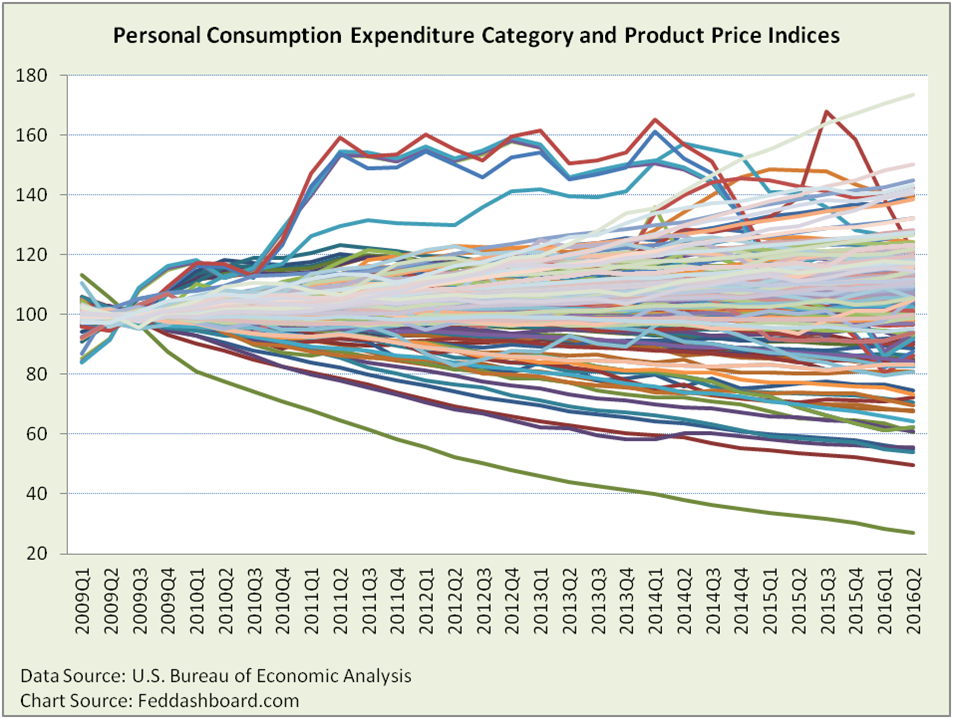 An average for the fan spread isn’t actionable, especially given different sizes of product categories. For example, this quarter, the huge health care category (17% of Personal Consumption Expenditures and roughly tied with housing for biggest category) defines average. The health care-heavy average says nothing about the spread of all product prices. It’s like calculating the average location of people in a preschool classroom, weighted literally by weight of persons, and finding the teacher’s location is the average. The teacher’s location says nothing about the spread of kids at their play stations. 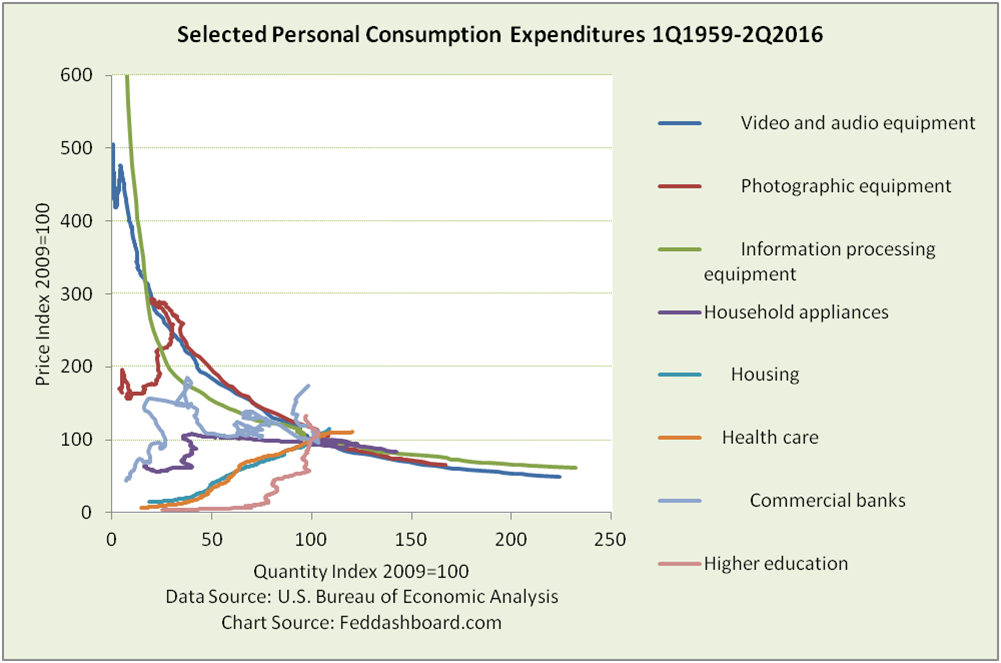 What do we see? It’s a myth that inflation always increases consumption.

From your daily shopping, you already know the dramatic “fork in the road” between goods and services.

Goods had been rising faster than services for decades, then sharply rotated downward in 1996. For those who looked, product level moves started in the 1970s in computer and, video and audio equipment. 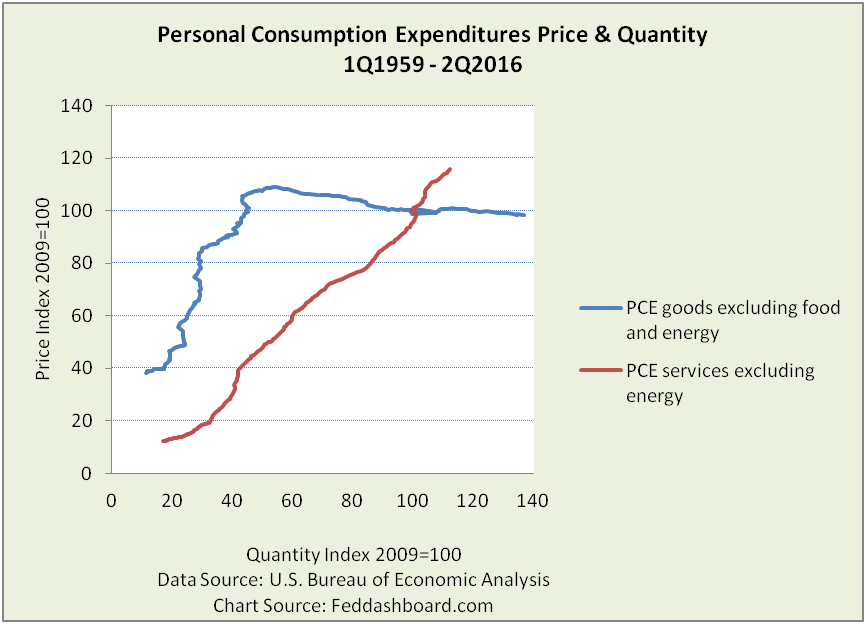 In the past year, only a few goods are higher in price, such as luxuries (jewelry and motorcycles) and those tied to government-subsidized services (drugs and educational books).  Only a few services are lower in price, such as securities trading and advice, internet access, non-U.S. Postal Service delivery, electricity and gas, and air transportation.

With goods and services so distinct, it’s irrelevant to plot a PCE average between the blue and red lines.

Instead, they fell into their inflation trap. To the extent the Fed increases prices; they mostly cut consumption of goods and do nothing to increase purchases of health care, higher education or bank accounts. The Fed can’t increase the number of people needing cardiac surgery.

Central bankers, use gatherings like the Jackson Hole symposium to answer three questions: