The tech and trade transformation changed production, shopping, and inflation. It also changed funds flows in the 1980s, increasing the daily forms of “money” and enabling autonomous financial markets. This undermines the Fed’s ability to achieve an inflation target. For investors, it means watching how well the Fed “gets” the problem and rethinks its actions.

How effective are central bank tools?

Short answer: less than in the past

This debate is huge. To simplify, first, we’ll stipulate that the Federal Open Market Committee’s (FOMC) initial intervention for stability was helpful. Second, rather than diving into the debate about the ongoing success of the FOMC’s actions, we’ll offer two more interesting observations given the current environment.

Milton Friedman’s car license plate was “MV=PQ.” It referred to the economic formula “money supply x velocity = price x quantity.” In search of answers, some observers used this as a roadmap. When any formula doesn’t work, the problem could be a change in the 1) variables inside the formula or 2) environment beyond the formula.

Some analysts started waiting “for ‘V’ to come back,” referring to the velocity of money (spend at which a dollar changes hands) in the equation. As velocity cannot be directly measured, analysts can explore two paths.

Below is a popular version of “V” (red line) that reflects money in public and institutional hands. Because of QE, attention has renewed on the monetary base (currency in circulation and bank deposits at Federal Reserve banks, blue line). Key points: 1) the early pattern broke in 1982, 2) wide range over time, and thus 3) shows more changing than spending speed. 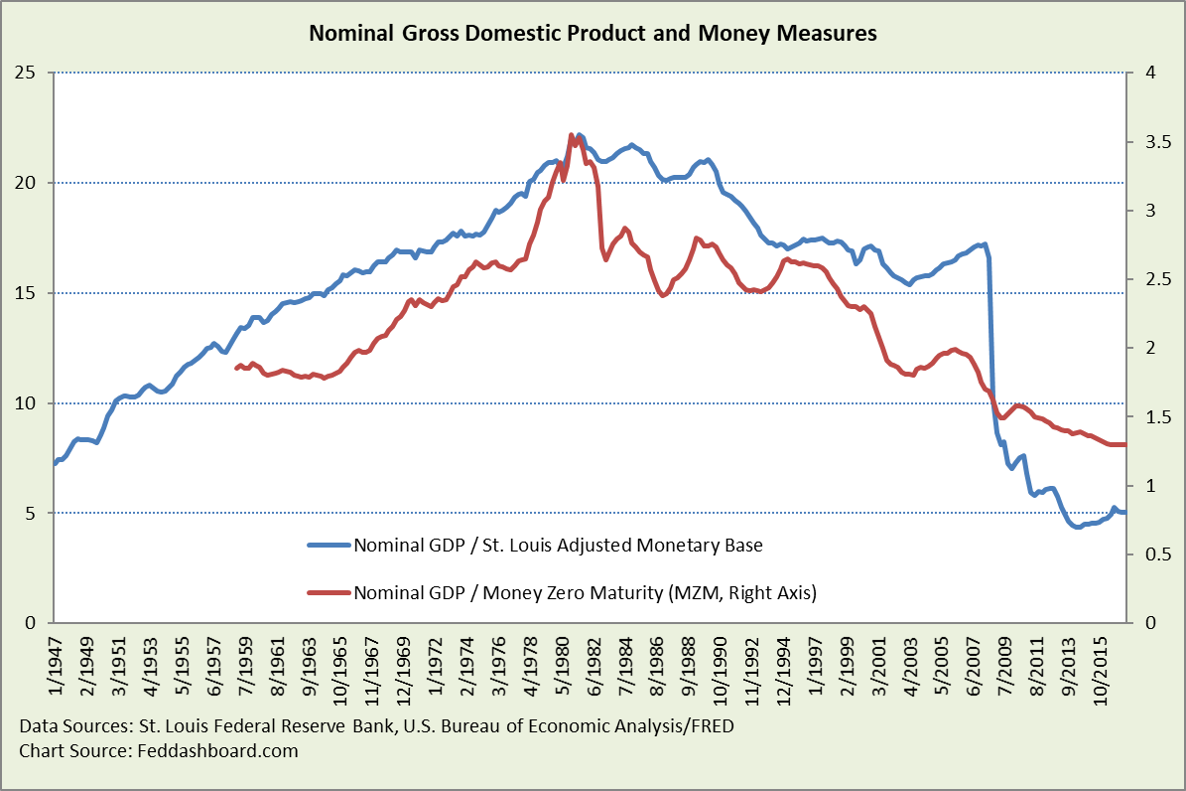 Another view is that the “M” (money supply) used in the formula is narrower than money used in daily life, including consumer credit cards and global financial markets enabled by the global tech and trade transformation, and regulation.

How did the global tech and trade transformation complicate central banking?

Short answer: It smoothed flavors of money and enabled an autonomous financial sector

Since the 1980s, automation and regulatory changes enabled complex financial products, the financial sector has become increasingly autonomous – trading with itself. Outside of times of stress when cash, gold, and regulatory reserves matter most, these new financial instruments (including credit) are closer substitutes for cash than generally realized. Consider one example…

Below, the ratio (blue line) of total financial assets to Gross Domestic Product (GDP) more than doubles from the stability before 1980 to present. At the same time, the change in product prices (red and green lines) is decreasing. Since the mid-1990s, this measure of money has been increasing while prices of tangible products have been moderating. 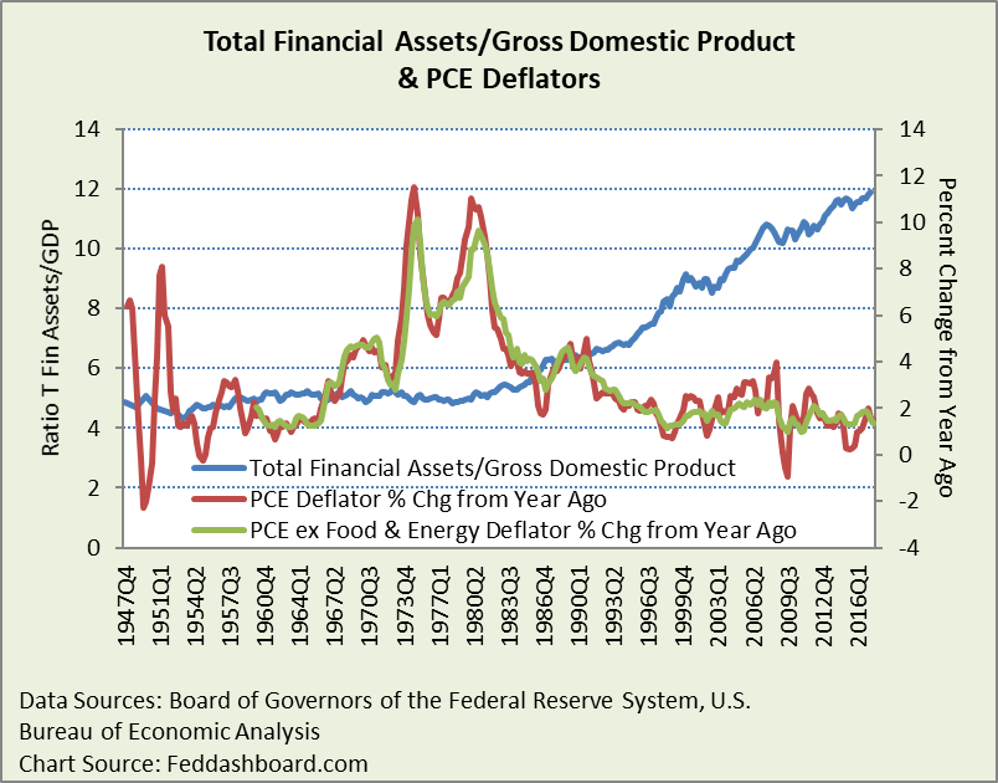 Below is the historical pattern of today’s top holders of U.S. Treasuries (USTs) – households and nonprofits, private pension funds and rest of the world. Top holders have changed over the years. In 1945, banks were by far the top holder. 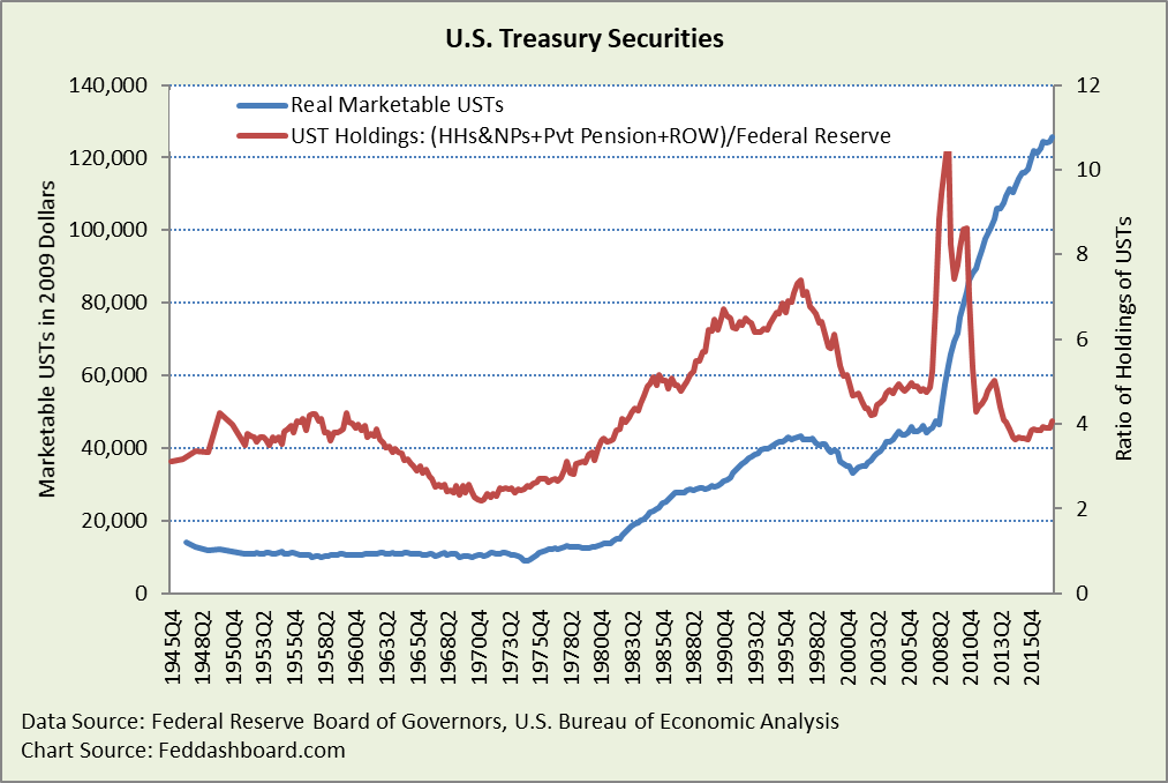 Autonomous financial sector creating money on its own and UST holdings beyond the Fed add to the tangible product tech, trade, shopping, and government reasons why the impact of money supply on product prices is less than in the 1970s.

What can central bank tools achieve?

First, QE can bubble financial assets. And, attract other funds flow – most notably funds from the rest of the world and Exchange Traded Funds as we discussed previously in “How to get over 90% of your returns with less stress – start with macro.”

Second, the Federal Funds rate can move tightly-linked private lending rates, such as for credit cards.

Third, monetary policy can lower currency value to make exports cheaper and imports more expensive – import inflation. Thus, it’s a path to both more domestic production for export and increasing inflation. The problem is that a central bank can only control their half of the equation. The European Central Bank (ECB) painfully learned this lesson after working hard to lower the value of the Euro through QE. Then, after the Brexit vote, the Euro/Great Britain Pound rate was back to its late-2009-early-2010 level.

Below, we see consumer goods prices deflected a bit by the Real Trade-Weighted U.S. Dollar Index against seven major currencies. 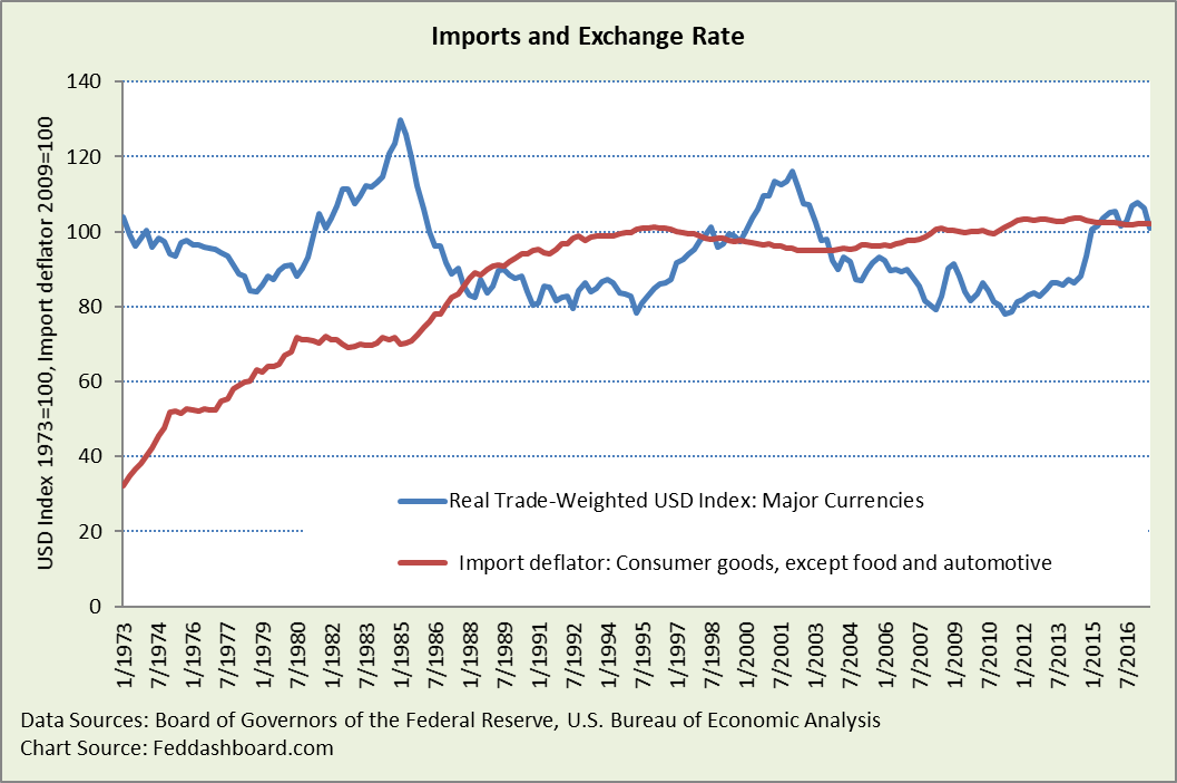 Consumer durables except food and autos have had little price change since the mid-1990s. This frustrates the FOMC. An FOMC desperately seeking inflation can find help in commodities, especially foods, feeds and beverages because that category has grown relative to all goods imports. 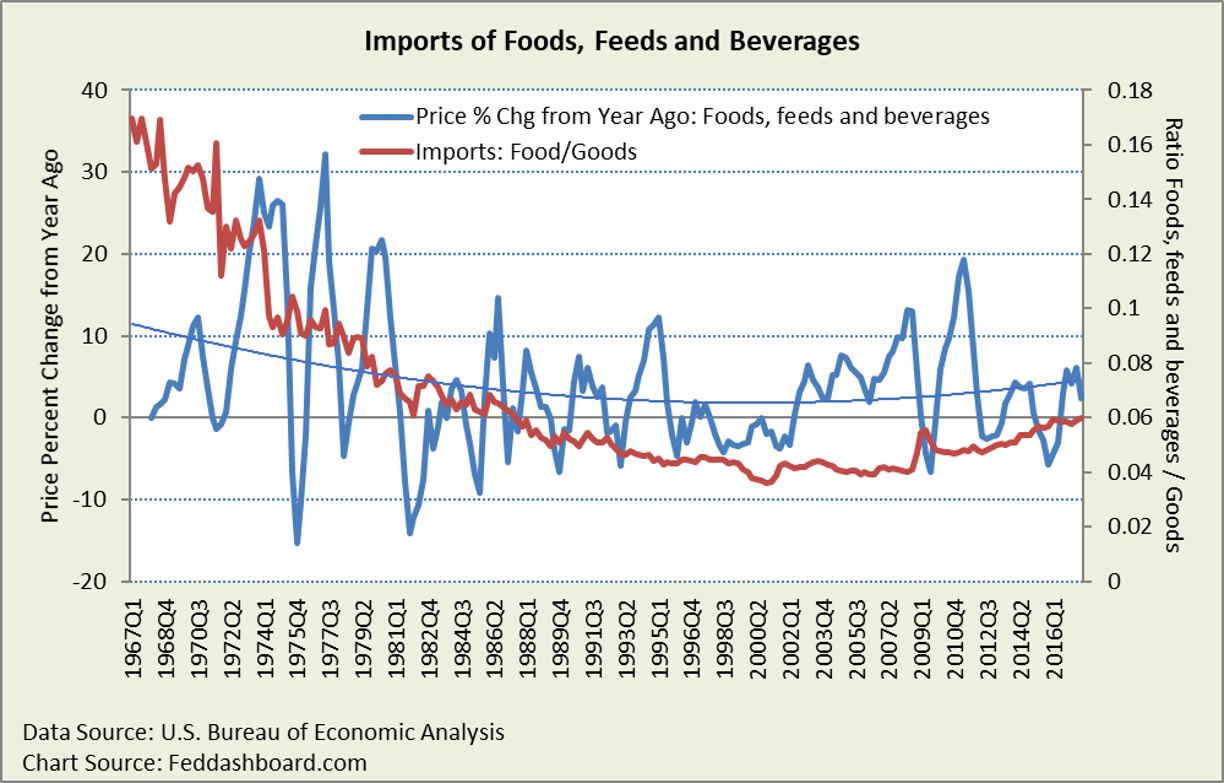 Investors can watch for signs of price increase:

Fourth, influence bank lending through the interest rate paid on the reserves that banks deposit at a central bank above the amount the required by regulation (Interest on Excess Reserves, IOER). The FOMC’s view has been that the IOER rate needs to be at the high end of the Federal Funds range to achieve the Federal Funds rate target. As of the December 2017 FOMC meeting, 1.5%. The retort is that paying this rate reduces the incentive for banks to lend and the U.S. would be better following the example of Canada and the UK. For more, George Selgin has described these dynamics in a series of articles at the Alt-M blog.

In short, monetary policy works best where it is most direct and not conflicted by global funds flows, other government policy, or other nations.

What does this mean for setting an inflation target?

Second, product prices fanning out on divergent trajectories (rather than clinging together) create two problems:

Third, financial stability is impaired simply because of the cross-currents hitting financial institutions and investors as they seek returns. This includes today’s inflation in financial assets versus restrained prices for tangible products.

When a central bank targets an interest rate (again, such as the Federal Funds rate) it’s in pursuit of objectives, such as “inflation” (practically, the core PCE deflator that includes non-monetary causes of price changes), output (Gross Domestic Product), Final Sales to Domestic Purchasers, or unemployment rate.

The more central bankers miss the data and dynamics, the more forecasts and FOMC “dot charts” will continue to be systematically wrong.

This leads to our next exploration in this series Forecasting “inflation?” – avoid the price-productivity trap.