Job loss warnings are scary — jobs being killed-off by technology without better jobs being created. Skeptics flag soft assumptions in job loss estimates. What people on both sides of the debate miss is the impact that already occurred.

Risk to a job is generally estimated based on the aspects of that job and technology available to replace humans doing the job.

Technology aspects focus on the timing of when tech will replace humans:

Skeptics are right to question the adoption estimates. However, their critiques often inappropriately:

What estimates have in common is that they build on U.S. Bureau of Labor Statistics (BLS) data. More research has been done in the U.S. than any other country because the BLS provides the most detailed data.

When evaluating data, they often don’t:

Thus, they fail to understand the causes of what they see in daily life and impacts it has already had on workers, investors/savers, and society. Thus, they make costly mistakes.

Below is percent change in hours worked from the mortgage debt meltdown (2009) to the most recent data (2015). Striking are the differences… 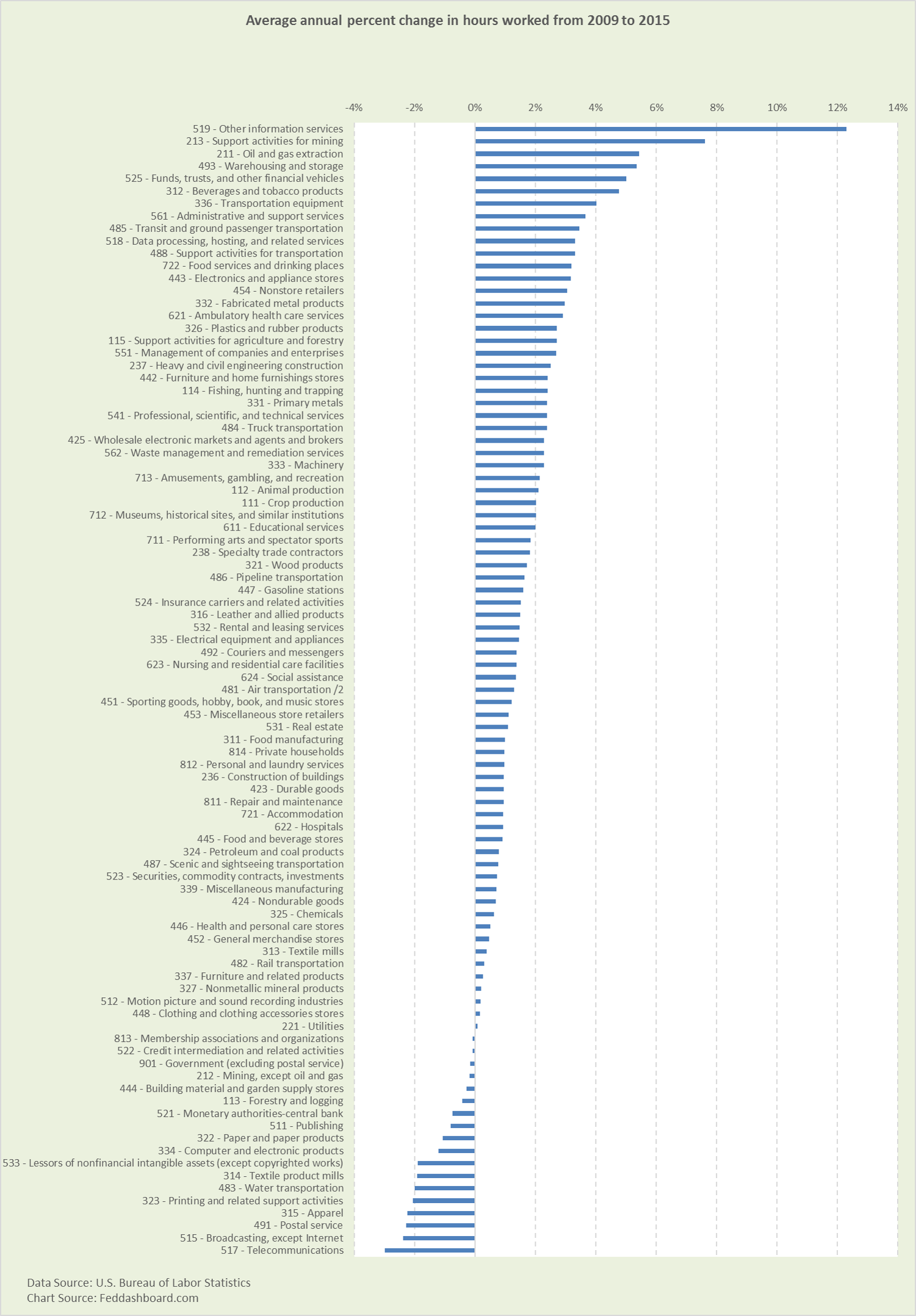 Highest growth is the “Other information services” industry that includes web search and content. Second highest is “Support activities for mining” because of both the rapid growth of oil & gas, and the increased use of outsourcing.

It’s long been known that the U.S. is shifting toward more services. But, most people don’t know what’s happening beneath and beyond the industry shift. For example…

As you review the list, realize how many changes flow from technology, trade, and demographics (including health care).

Industry changes cascade into changes in measures such as labor productivity

Labor productivity is output (such as units shipped) divided by hours worked. As illustrated previously in “Fed is wrong on productivity; here’s how investors can profit from the data” and “Productivity puzzle explained — discover what happens when trends collide.”

Growth rates are helpful, but they don’t tell the whole story. The plot below adds the 2015 number of hours worked. 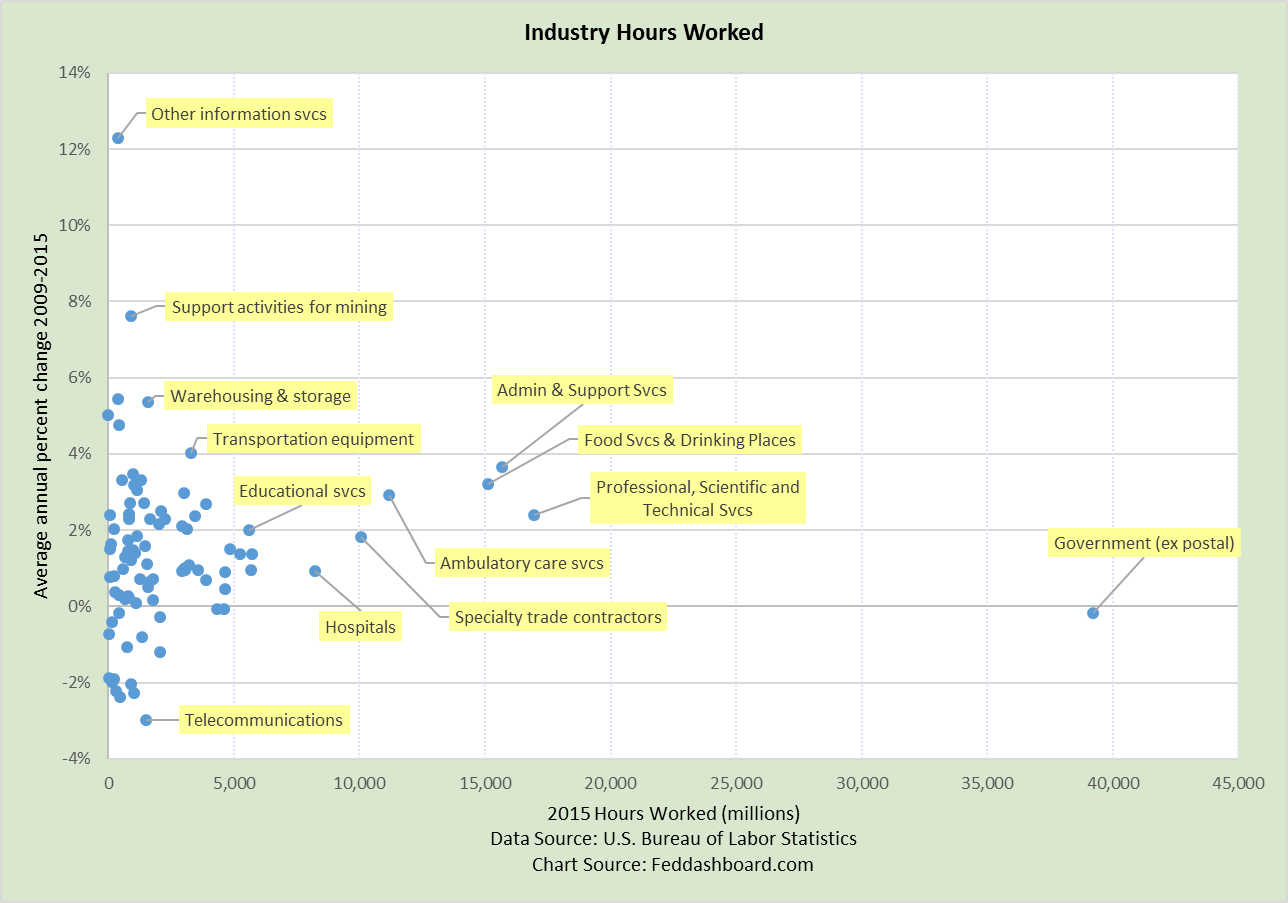 Stand-outs in size include business services, restaurants and bars, and ambulatory care. Ambulatory care reflects both demographics and a cost-saving shift from hospitals. Both ambulatory care and hospitals are seeing more use of tech to diagnose, and improve surgery and patient care (as in Japanese trials).

Striking is the number of industries reshaped by the tech and trade transformation.

As averages hide answers, time reveals distinct patterns after both the dot com and housing bubble crashes. For all industries combined, average labor hours per person fell starting 1999. Since 2009, hours worked in other information services grew steadily. In support activities for mining, hours were slammed when oil price fell. 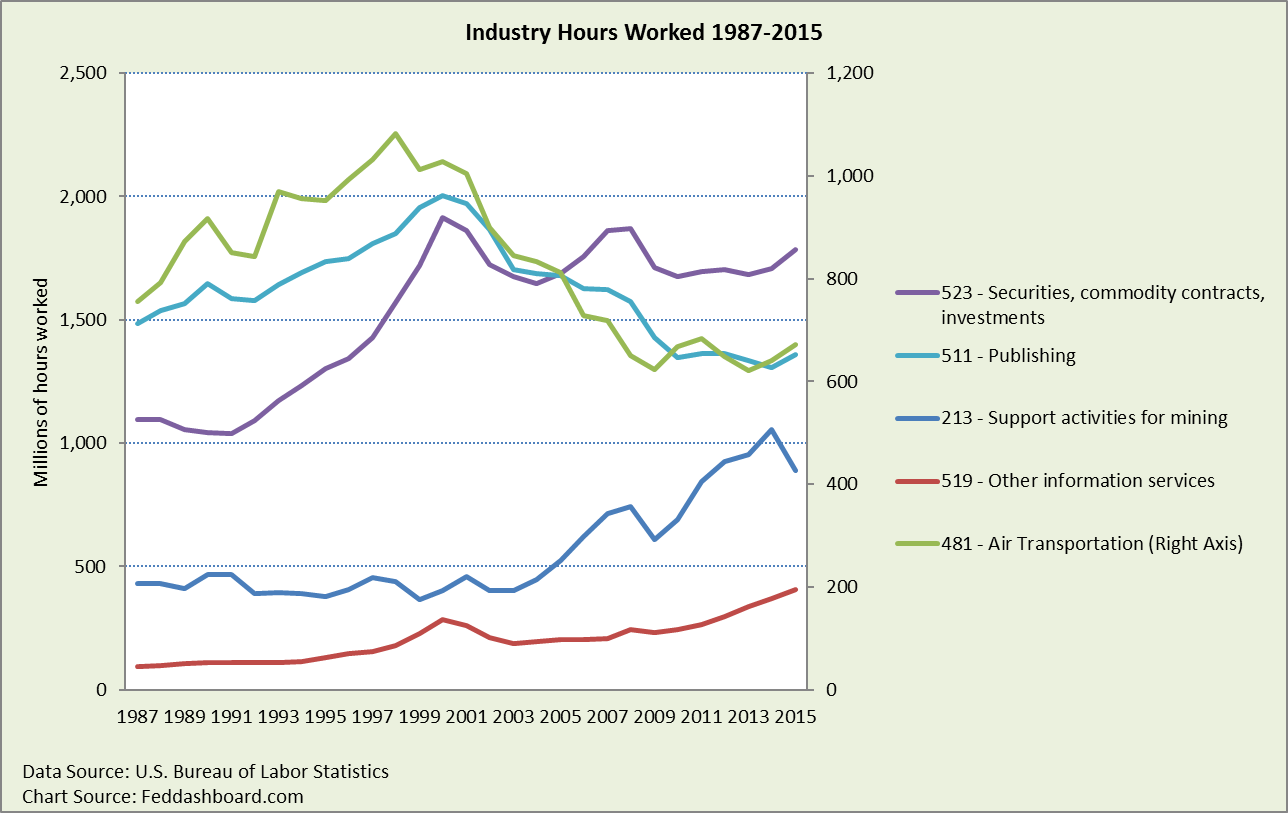 The “future” of work already changed

Changes in job activities aren’t new. Tech appears new because tech is racing ahead at a nonlinear (exponential or power curve) pace, especially digital technology since the late 1960s. Tech has changed more than just productive equipment and logistics, it has also enabled better management practices. This lowered product costs across the “research-to-retail” value chain that then enabled two decades of falling goods prices as discussed in “Tech & trade – “must discuss” topics for Jackson Hole.”

For public policy, these impacts are far reaching in everything from trade to health care. For example, in health care, they suggest that a way out of our cost problems of demographics and improved palliative care is by doubling-down on tech. Further, it means that the jobs problem can’t be “fixed” just with proposals from past decades. Yes, regulatory reform and exports are necessary, but these don’t address the ripple effects of tech.

The imperative is to deeply understand the dynamics of the tech and trade transformation.