Trending
You are at:Home»Asia»Japan’s economy — ready for the next policy step

Private spending and net exports matter most to growth

Japan’s recent Gross Domestic Product (GDP) growth has been driven by private sector decisions in consumption and investment, and net exports. This is good. A government can boost GDP through deficit spending, but that 1) is not the same as confident private decisions and 2) adds debt. Japan’s restraint can be viewed as an admirable contrast to countries struggling with sovereign debt problems. 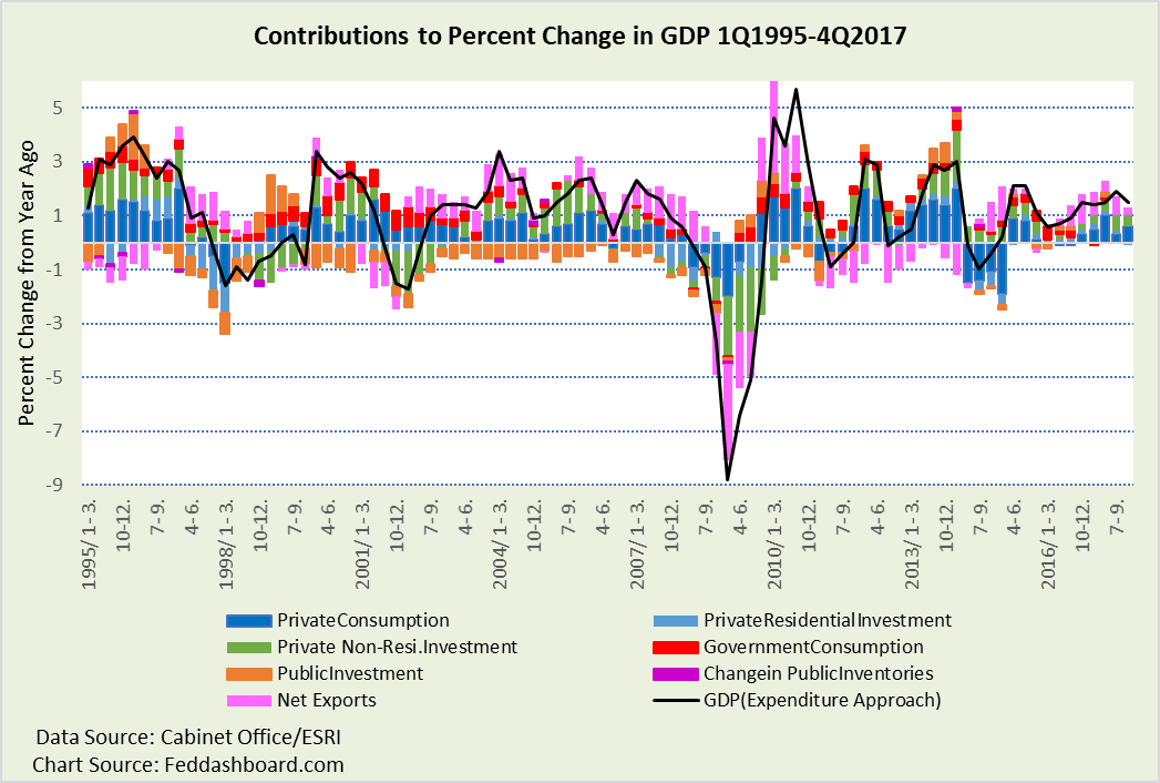 Focusing on the shopping decisions of households, it’s striking to realize that shoppers buy more when prices fall. Theory says this is only possible in the short run because production costs are always increasing. Theory broke in 1997. Deming-inspired methods of “Japan, Inc.” reduced production costs and created abundance in productive capacity.

The “global tech and trade transformation” refers to changes in management technique, technology, and trade. The concept is millennia-old. The most recent phase started with Japanese exports in the 1970s from audio equipment to cars.

Improving “management technique” includes the broader adoption of Deming innovation and quality methods beyond major export industries, including women to expand the workforce and household incomes, and immigration, especially related to trade.

Below is a price-quantity diagram. Through the early 1990s, the price-quantity relationship was upward-sloping. Then it flattened. In 1997, it pivoted to downward-sloping – meaning lower product costs and prices – and shoppers bought more.

This shift changed everything. Increasing prices tends to cut purchases – that’s stagflation. This was dramatically seen April 1, 2014 with the Value-Added Tax (VAT) increase. The 4Q2017 data point reflects a jump in energy prices. 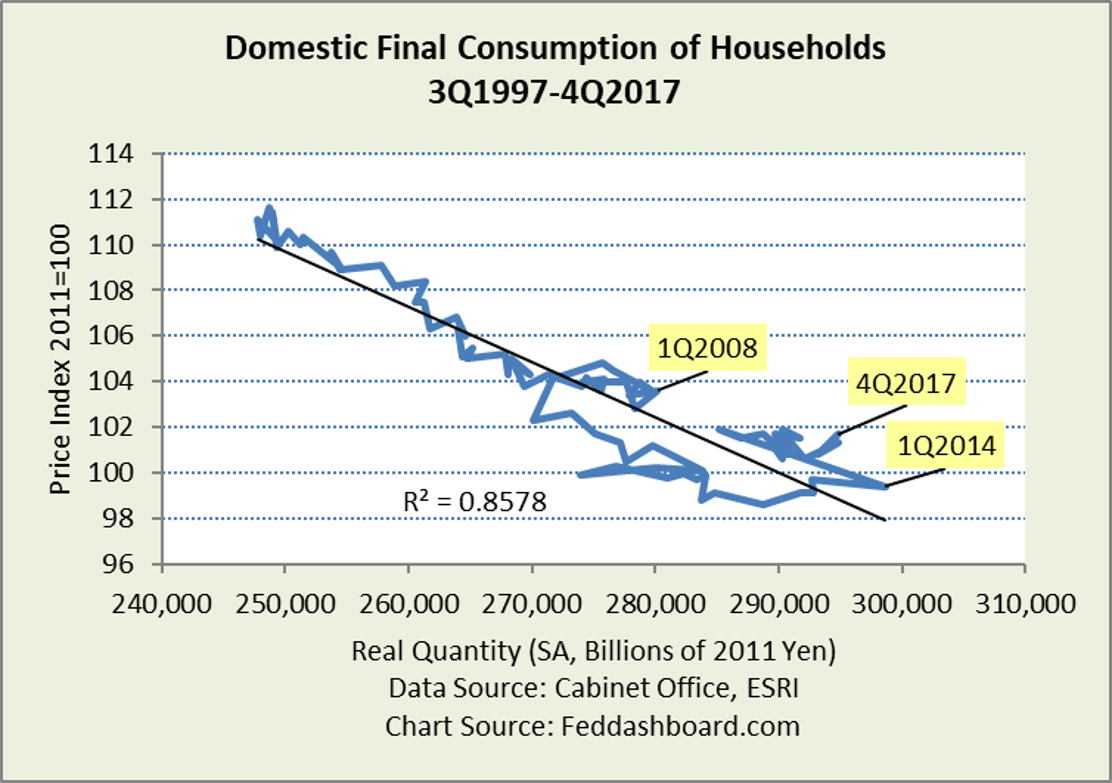 Household consumption can be split into four categories, each with a distinctly different pattern. 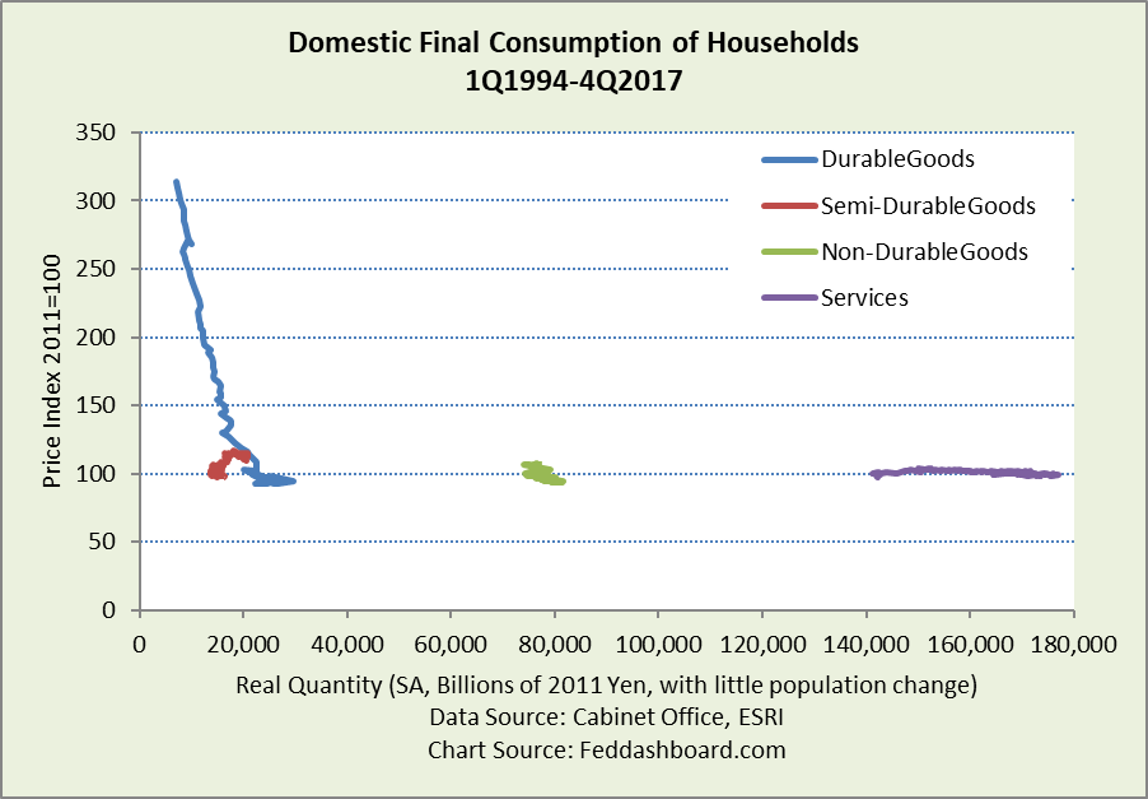 For an indexed and close-up view of this chart, please see “Good news: the Japanese economy is healthier – time to make babies.”

QQE has struggled to increase goods and services prices for the same reasons as in the U.S. and other countries: 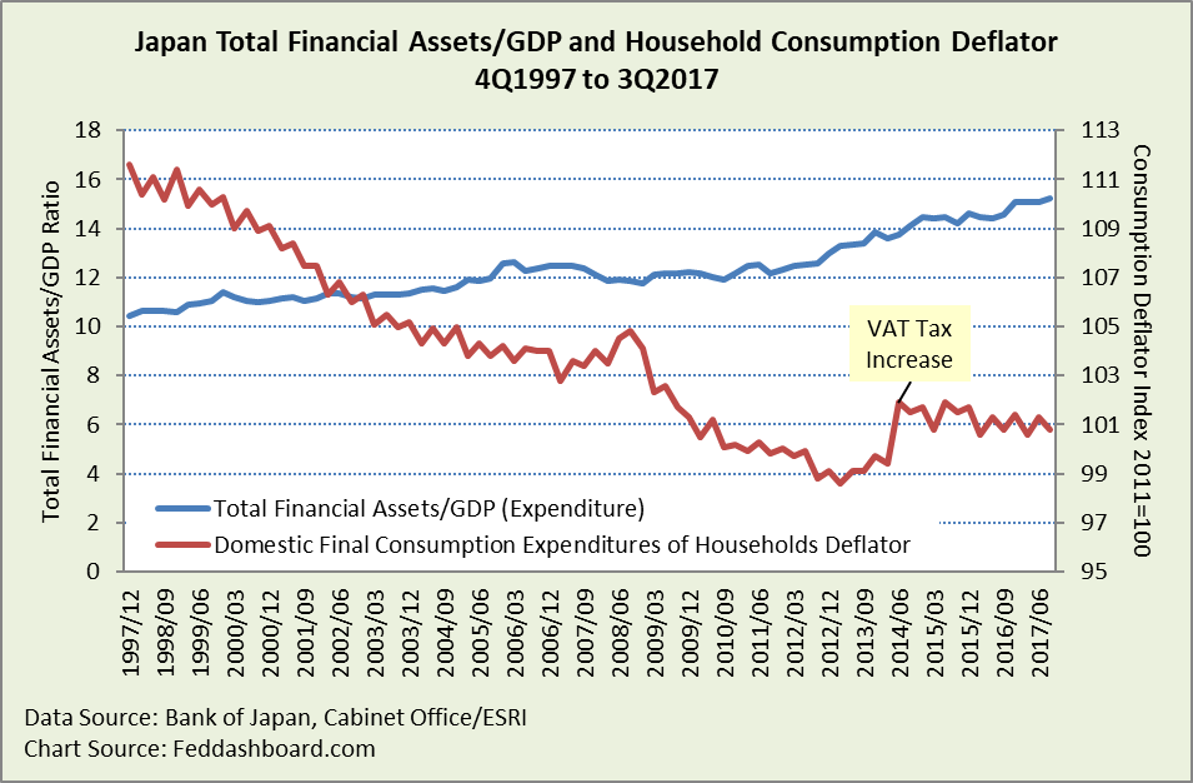 This is similar to the situation in the U.S., Japan is not alone.

QQE and the Value Added Tax put upward pressure on prices. To the extent prices increased, consumption suffered. As of 4Q2017, real purchases of semi- and non-durables hadn’t recovered to their levels of 4Q2013, services are just 2% higher and durables 5% higher.

A brighter story is the growth in real personal income, recovering from the VAT tax increase in 2Q2014. The most recent quarters have been hurt by higher energy prices. Good news is that growth rates are nearly at 1995-7 levels. A negative is raised by analysts who note that higher compensation of employees is offset by higher contributions to social insurance and taxes – so spendable pay has suffered. As in any country, the averages hide variations by worker demographics and job type. Still, shoppers grew durable goods purchases by 7% from 4Q2016 to 4Q2017. The strength of shoppers buying sensitive and discretionary durables is a good sign. 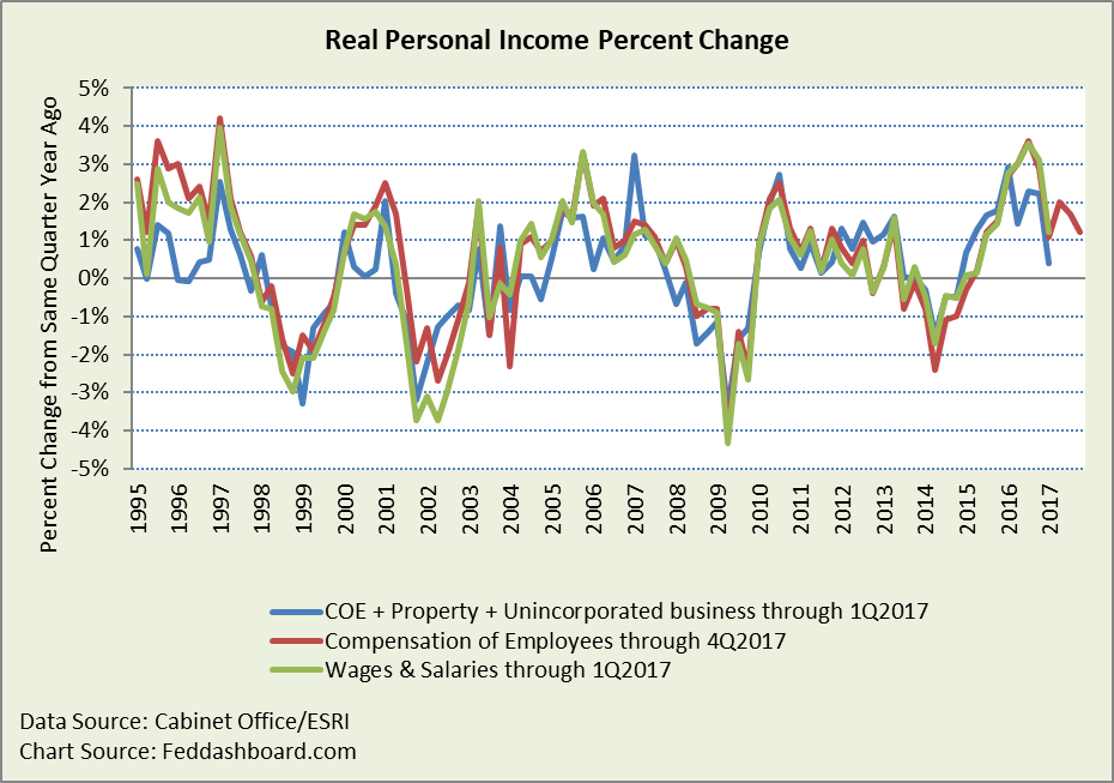 The small size of Quantitative Easing (QE) compared to all financial assets limits the influence of QE on goods and services prices. This has also been seen in the U.S., as we illustrated in “Investors: See how the tech and trade transformation frustrated the Fed’s inflation-targeting.” 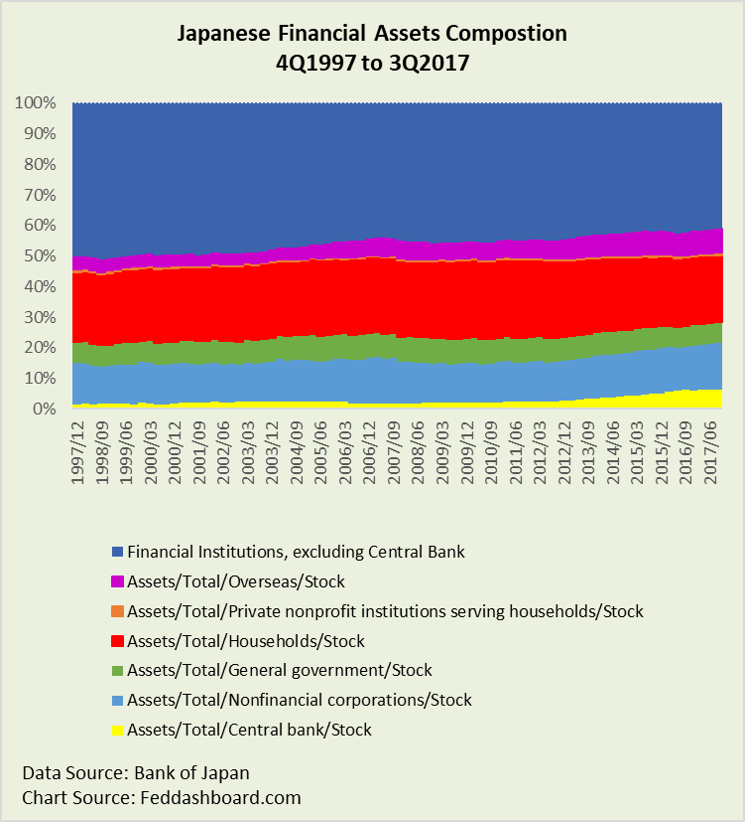 QE is able to increase equity prices – as also in U.S. and Germany. 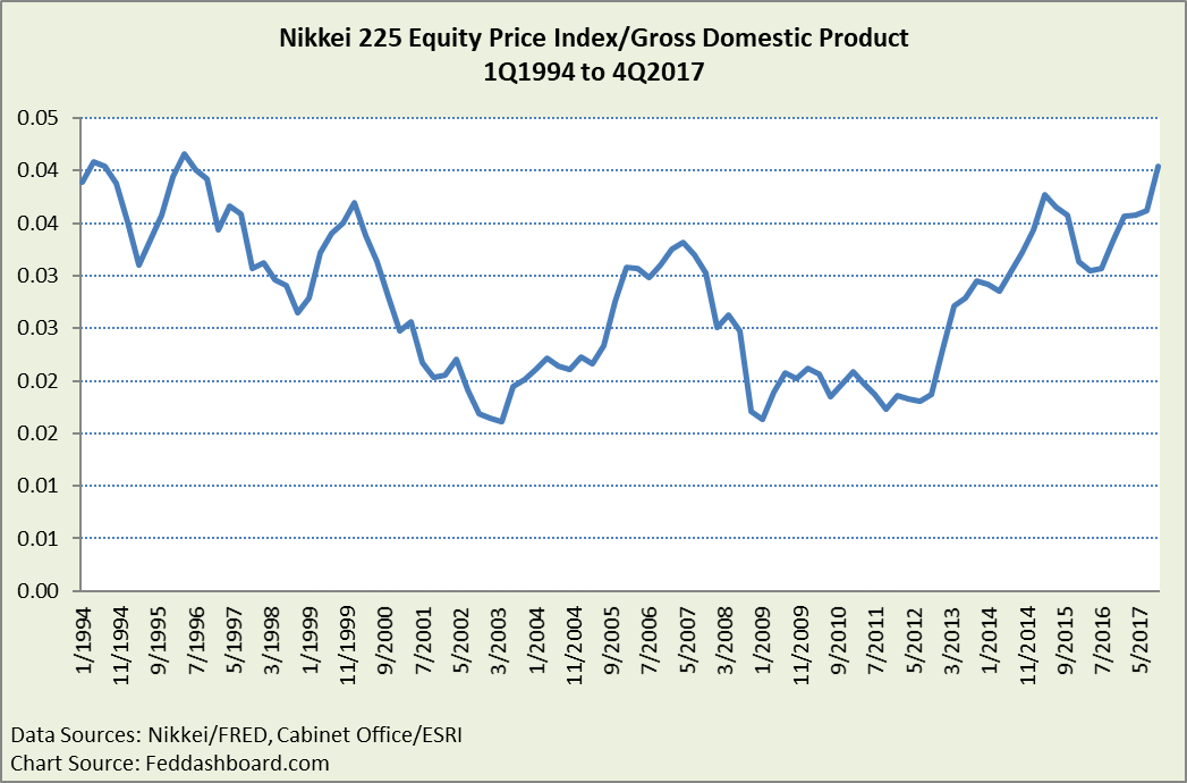 This two-decade high is a significant benefit to savers, although with more risk than bond yields.

The rise in equities combined with the “safe haven” attraction of the Yen tends to offset the Yen-devaluing influence of QQE. Below, the Yen is near its lows against both the U.S. Dollar and the currencies of its trading partners. 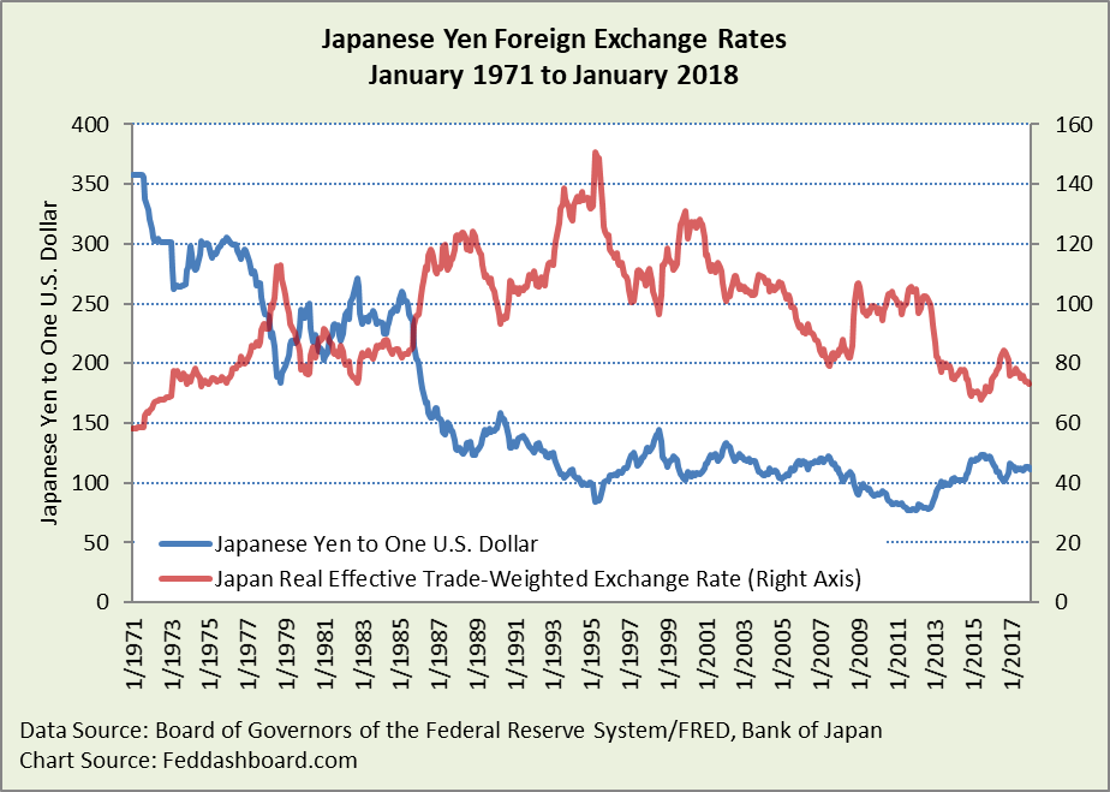 These dynamics give the BOJ the opportunity to:

For Governor Kuroda’s new term of office, this creates the global leadership opportunity to be the role-model for all central bankers learning to thrive in the world of the global tech and trade transformation.