Trending
You are at:Home»Money & Prices»Fed Funds link to 10-Year Treasury is treacherous

As the Federal Funds rate increases, investors and the Fed expect a proportional move in the 10-Year U.S. Treasury yield. Is that expectation reasonable? History says, “no.” Using such expectations for investing is risky. The linkage is weak and can lead to major errors.

But, there’s a problem. The FF-to-10UST relationship hasn’t held well.

Inconsistencies in the relationship reflect fundamental changes in our economy, including:

To avoid risk, be mindful of misleading “rules of thumb.” Instead, focus on the enduring structural trends.

Evidence is in the data

The relationship can be viewed in two ways:

The chart below shows the second approach. Each point on the chart is a monthly pair of FF rate and 10UST yield. 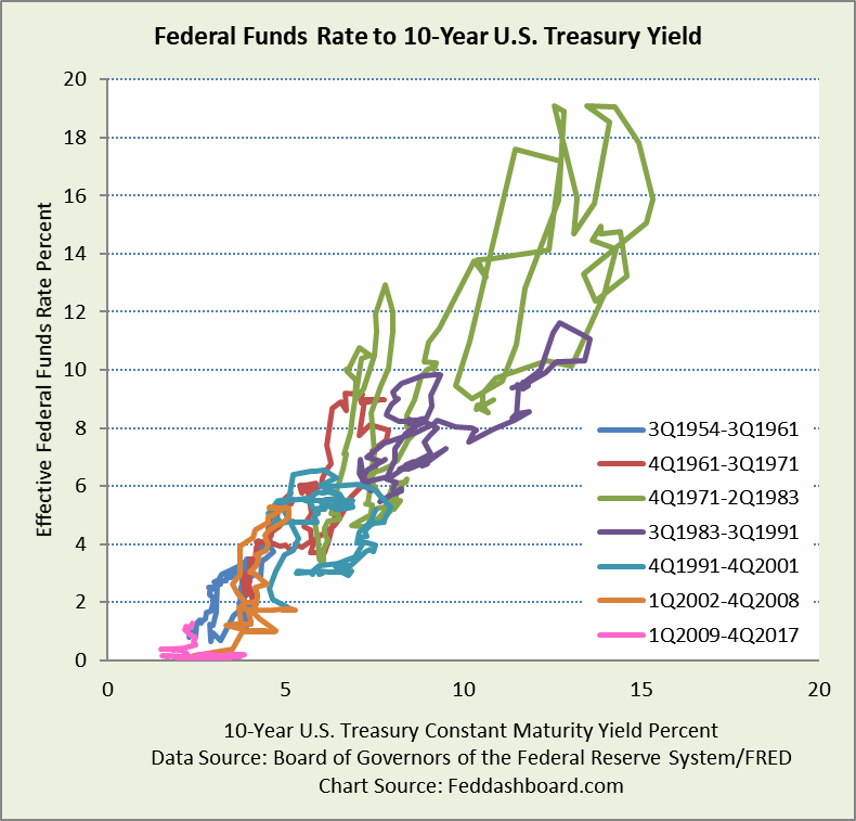 To see the FF-to-10UST relationship as a ratio or spread, see “Has Fed interest rate policy lost its edge?”

Below, zooming in on the past quarter-century, the relationship isn’t much tighter. It has also moved sideways.

Seen in the twists and turns are the effects of credit and asset bubbles, fiscal and regulatory policy, and the global tech and trade transformation. 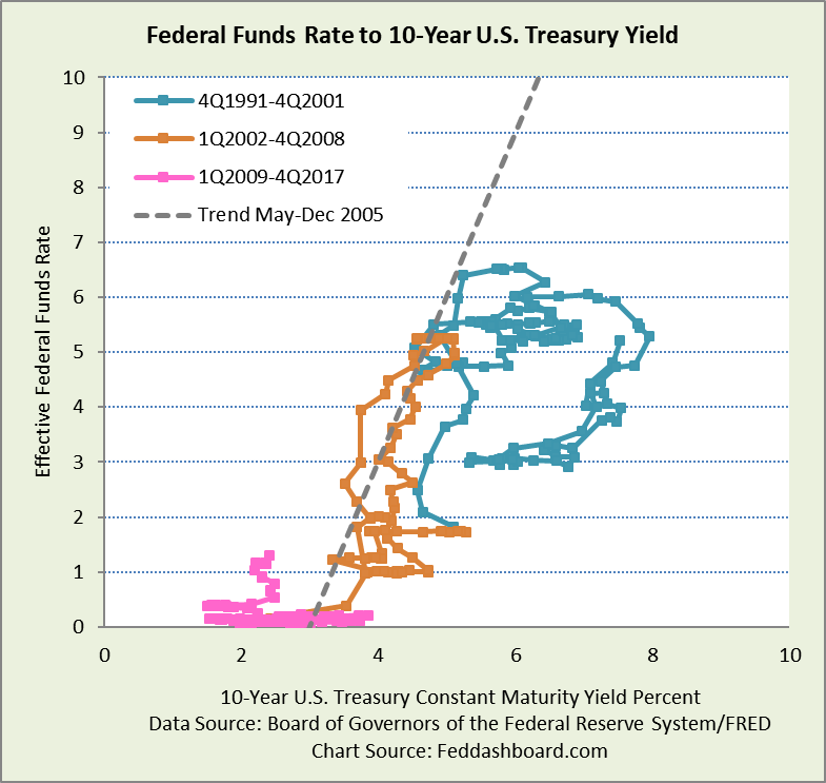 It’s difficult to find a stable trend. During Quantitative Easing it was stable, but horizontal. A stable period was May-December 2005 (copper color line with trend line). Roughly parallel on the left is November 2007-March 2008, on the right is May-December 2001. Rare and differences:

The value of the plots above is that they starkly show what is obscured in gentler yield curve comparisons.

Underneath the pattern is the shape of the yield curve

10USTs can be different for reasons including:

Picking interesting dates in the past 17 years, below are U.S. Treasury yield curves.

Breaks in a yield curve are because a maturity wasn’t available/reported by the Fed in that month.

Notice the errors in past expected yields – how far they were from today’s actuals, even as recently as 2015.

Each period had its story. Understanding those stories and what is new today improves forecasts.

The Fed gets grace in its rules of thumb because it is on its home turf. Yet, the Fed has limits given global financial markets, as we’ve written previously in “Investors: See how the tech and trade transformation frustrated the Fed’s inflation-targeting.”

For more, see our past analyses: