Debt becomes most destructive – when, like a drug, more debt is needed to support sales and production. It’s worse when debt also bubbles financial asset prices.

After 1979, sales and production fell relative to debt

From about 1958-79, roughly constant was the ratio of Gross Domestic Product (GDP) to Nonfinancial Sector Total Liabilities at about 0.6.

In those decades, when people, businesses, and governments borrowed to invest in houses, productive capacity, or infrastructure, GDP increased proportionally.

Debt is helpful when incurred by people with comfortable debt to income ratios and with little threat to that income.

Then the relationship collapsed, more debt no longer proportionally increased GDP during the 1980s.

In the 1990s, the relationship stabilized, but at a lower ratio of about 0.45. From 1997 to 2009, the ratio again fell – debt contributed even less to GDP. Part of the reason is that debt had been used to buy houses. The debt is accounted for when incurred. But, the benefits are accounted for more slowly as ongoing housing consumption expenditures.

These falling ratios reflect a destructive aspect of debt. When the use of debt becomes destructive, debt grows, but productive capacity and sales don’t grow.

Excess debt hurts businesses because it is a fixed cost, regardless of sales. Excess debt hurts consumers when high rates combine with high debt service to choke off consumption and thus GDP. This painful, personal story is too common.

Zooming out, the national data is more like epidemic-level data. It takes more of the debt drug to support goods and services purchases. While individuals might be cut off from new debt, across the population, debt rises. Thus, the ratio falls. In addition, even good drugs can damage the digestive system, hurting people more.

To be clearer, consider key components of GDP. In the view below: 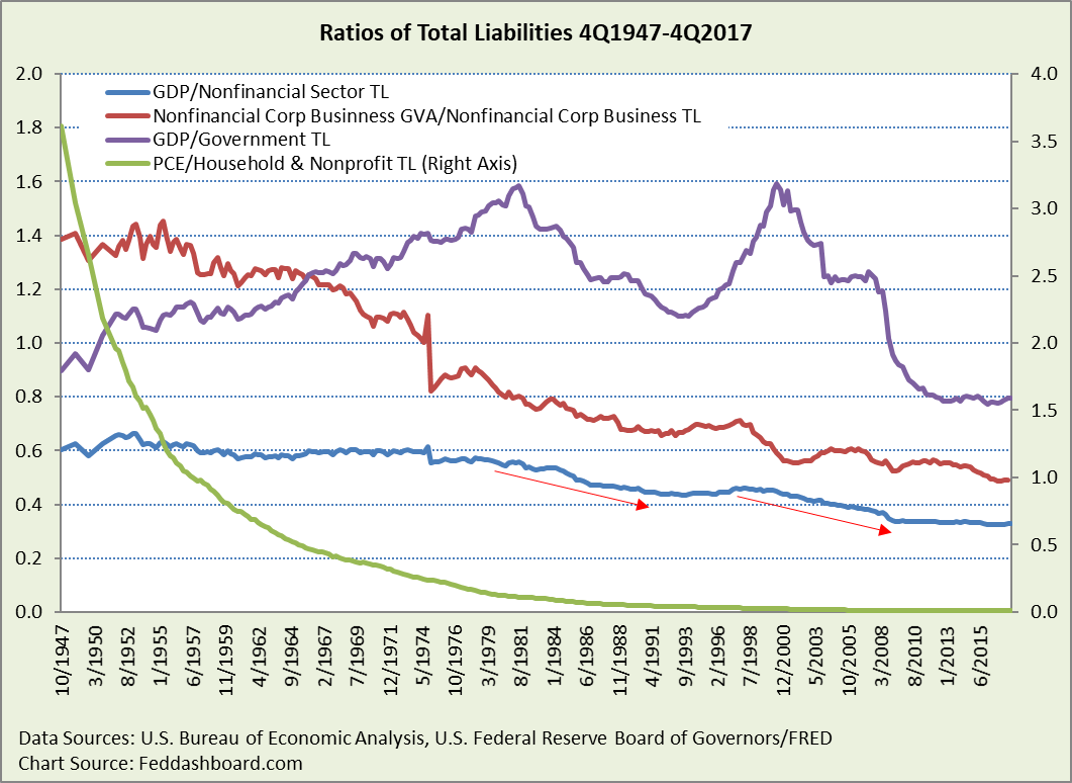 In short, the benefit of debt to enable sales and production has greatly diminished.

The benefits of debt to GDP may have deteriorated, but debt still flows to corporate equity values. Since 1974, Household and Nonprofit Total Liabilities have been a dominant force in corporate equity market value. 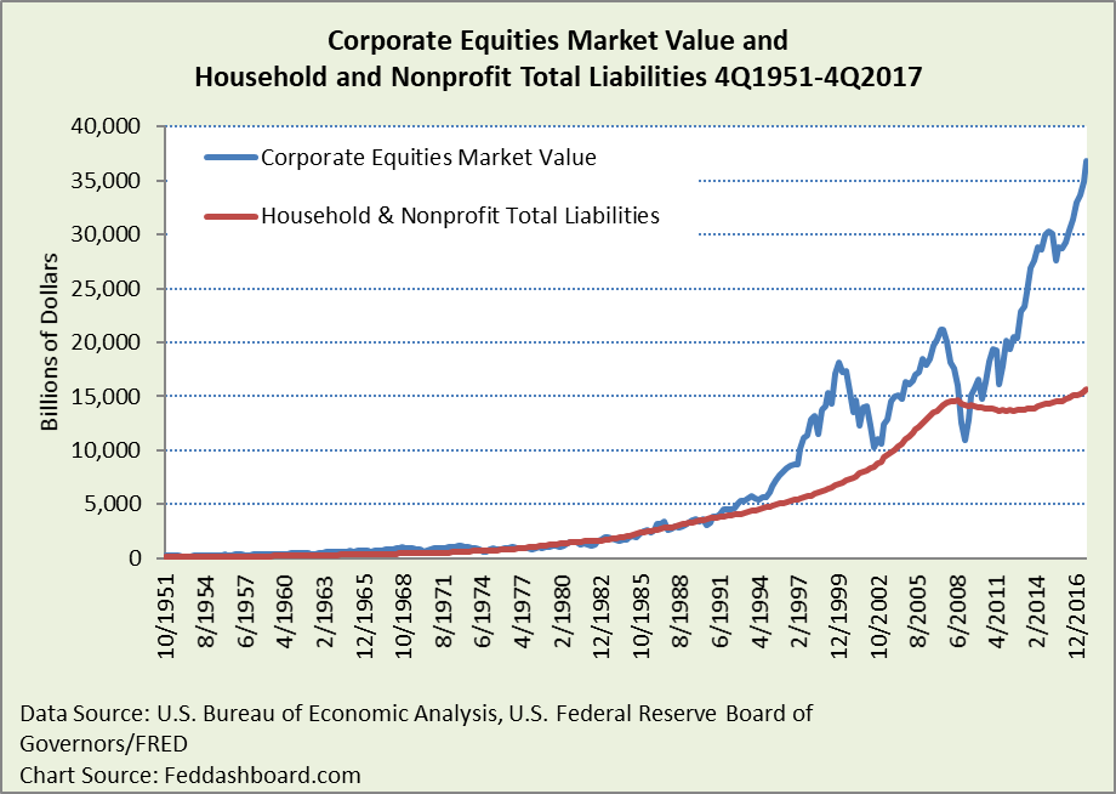 The exceptions to debt dominance include:

The line chart below plots ratios. Thus, the flatter the line the more a factor in the denominator is consistently tracked by the numerator — the market value of public corporate equities. 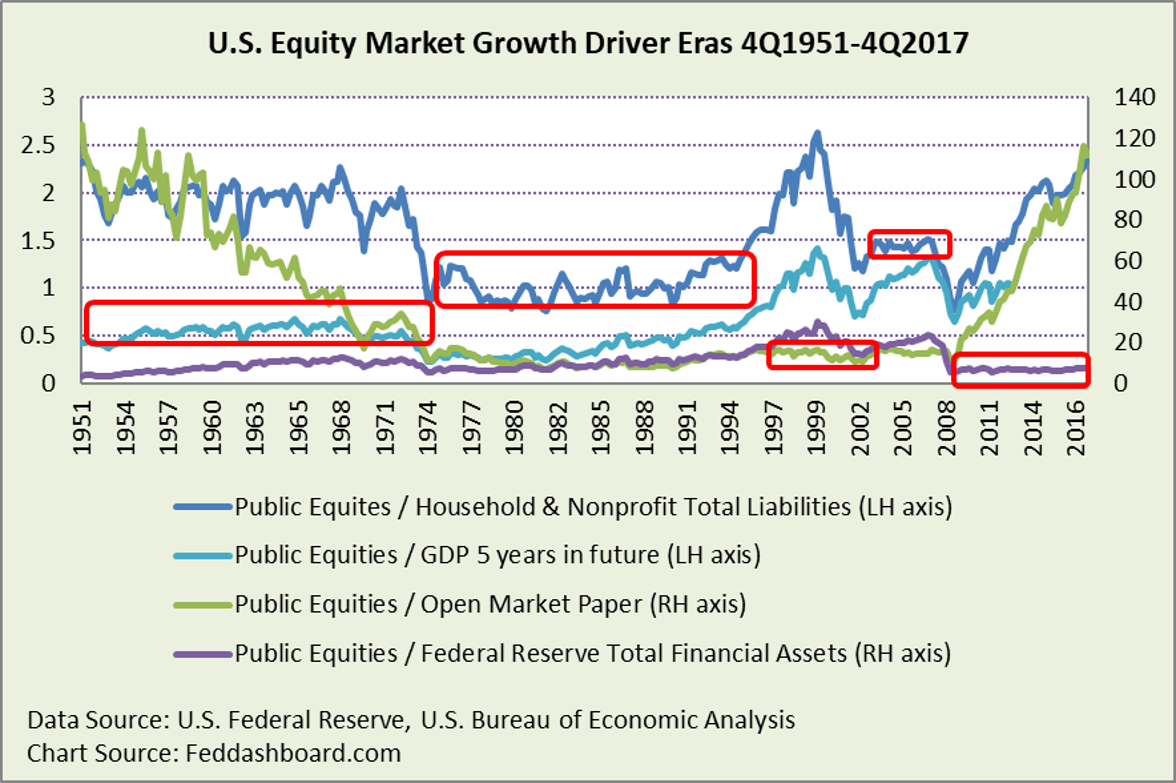 With the Federal Reserve reducing its asset holdings, the relative influence of debt mathematically increases.

For investors, this calls for an increased focus on business model-based investing and risk management

For governments and central banks, this means a policy rethink