Trending
You are at:Home»GDP»It’s not secular stagnation; it’s the tech and trade transformation

Larry Summers repeatedly cites powerful changes in our economy as he makes the case for “secular stagnation.” But he misses the most important changes. First, he fails to distinguish between products growing (such as consumer tech) and those stagnating (such as dental services). Second, he misses the significance of falling product costs that have both enabled growth in purchases and lowered interest rates. Behind both of these, he misses the magnitude of the tech and trade transformation.

“Secular Stagnation,” was coined by Alvin Hansen in 1934 to describe long term stagnation at the same time as low real (inflation-adjusted) interest rates. Larry Summers, the Harvard economist and former Treasury Secretary, revived this concept at a 2013 conference at the International Monetary Fund (IMF). As this phrase has been used in many ways over the decades, it’s helpful to understand what Mr. Summers means. In a February 2016 article in Foreign Affairs article he wrote, “The economies of the industrial world, in this view, suffer from an imbalance resulting from an increasing propensity to save and a decreasing propensity to invest. The result is that excessive saving acts as a drag on demand, reducing growth and inflation, and the imbalance between savings and investment pulls down real interest rates.”

There is much to commend in Mr. Summers’ analysis, including:

“…ultimately”, as he noted in a Bank of Chile presentation in 2015, “we need to think very hard about a whole set of ideas…”

Beyond his solid points, to test whether Summers’ revival of “secular stagnation” is correct, we can ask three questions:

To illuminate the first question, we turn to one of our most popular data pictures – a price-quantity plot of product categories. It’s easy to compare the degree of stagnation after the mortgage bubble burst because the base year is set at 2009 by the U.S. Bureau of Economic Analysis (BEA). The retail price reflects all the costs from “research-to-retail.” More versions of this chart are found in the Money and Prices Section. 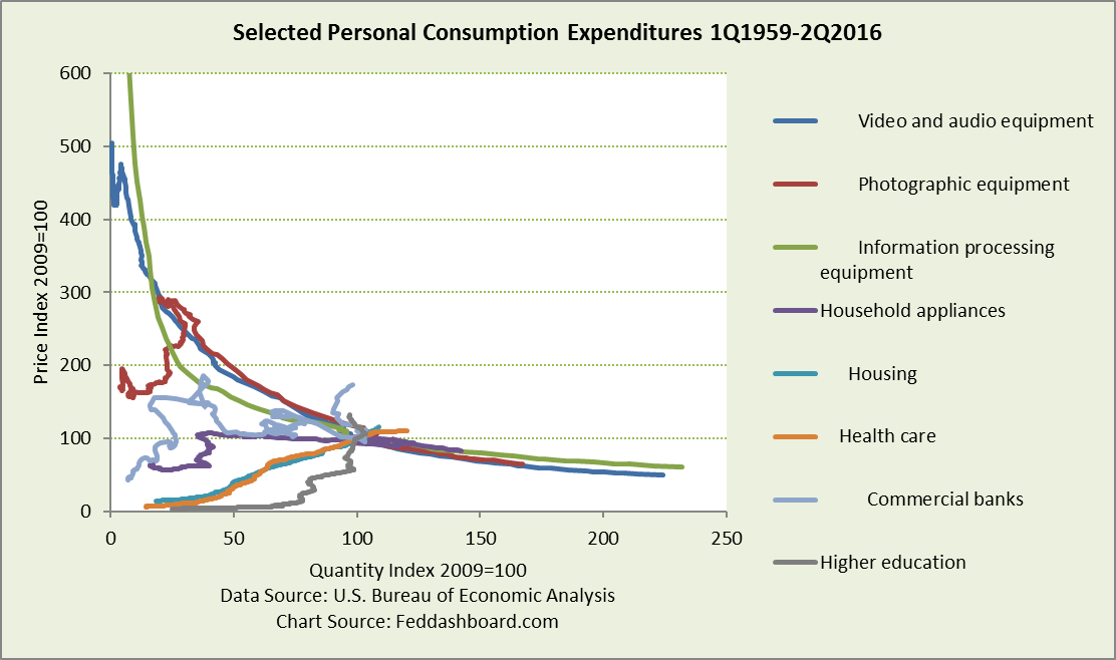 So our first question was, which product unit sales are stagnating?

Yet, “secular stagnation” is not just about stagnating GDP, income or consumption. For Mr. Summers, it’s about stagnation caused by “excessive savings” that acts as a drag on “growth and inflation.” This assumes that changes in purchases (“growth”) and prices (“inflation”) move together – increasing or decreasing together. Is this assumption true?

For health care and housing it is usually true. Purchases and prices usually increase together, moving toward the upper right on upward-sloping price-quantity curves.

But, the assumption is not true for other products. Indeed, the opposite is true. Visually this is seen in a downward-sloping curve.

This dramatically changed in the mid-1990s. After that, the average price of goods fell and purchases of goods increased faster than services. 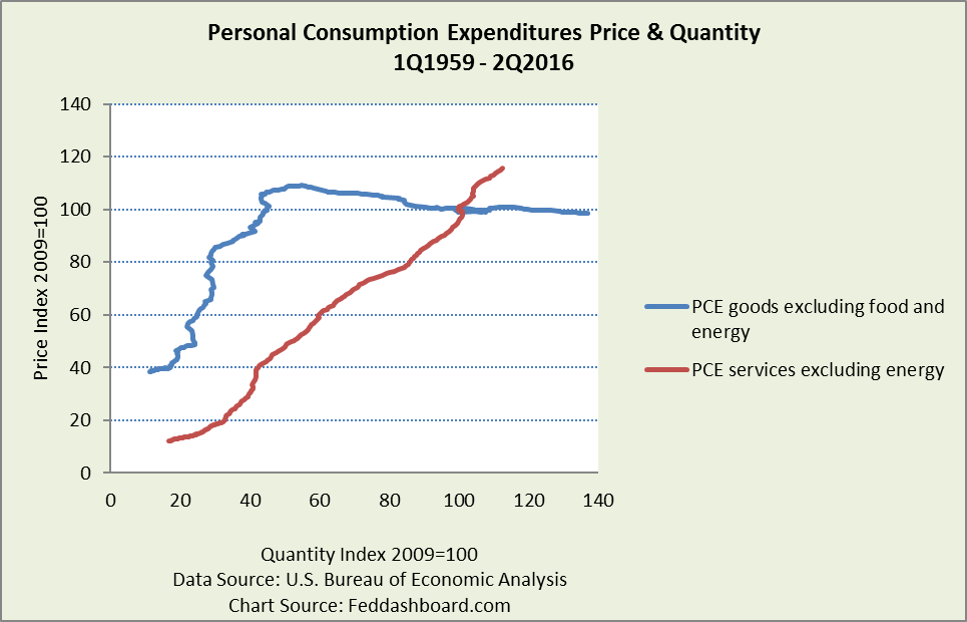 So the answer to our first question makes clear that jumping to a “stagnation” conclusion is an error of oversimplification. Purchases of many products are growing as prices fall. For more insight, individual product dynamics can be checked, including influences of demographics, debt and Fed-driven price increases.

This takes us to the second question about why the neutral real interest rate is so low.

Could these supply and demand drivers change in the future? Yes. For example, massive debt deleveraging could wipe out liquidity; central banks could shrink their balance sheets; ending conflicts in the Middle East, Africa or elsewhere could open those regions to investment; or nationalism could crush trade. But the tech trends will endure at an exponential pace.

The third question about why businesses aren’t investing more is already partially answered by the far lower need of funds for production. In addition, too many businesses have been slow to invest, starting in about 2000.

Before followers of Mr. Summers’ thesis rush to increase government spending, policymakers might consider the extent to which their imperfect understanding of economic reality, burdens of business regulation, and policy churn cause a business to reject new investment. Start by fixing this.

In short, it’s not “secular stagnation,” it’s the tech and trade transformation.

Mr. Summers is right when he said we need to “rethink,” but rethinking after examining the data more closely and more fully appreciating the tech and trade transformation.