Trending
You are at:Home»GDP»Potential GDP is potentially misleading

Potential GDP is widely used in quantitative (quant) and other investment models that select investments (such as sector rotations) based on what an economy is capable of producing if resources were more fully used. As it is a rather mysterious bit of math, investors often just take it as a given. Yet, because it glues together so many assumptions, investors would do well to poke on it. With a fresh look, Potential GDP is higher than generally assumed mostly because more resources are available and inflation pressures are lower. Inflation pressures are lower because a) the official unemployment rate doesn’t fully reflect available labor and b) trends show consumers are able to buy more at lower prices. This insight creates opportunity for investors. For individual investors who simply reference Potential GDP for cycle strategies; lower the weighting or shift to another strategy. For quants designing models, reset your models.

Just so you know… This is intended for modelers or individual investors with “inquiring minds.” Thus, some background is assumed. Hyperlinks are provided to related Fed Dashboard & Fundamentals articles and other sources. For academics, apologies that this breezes over hot topics in math and theory. Here, emphasis is modestly on illuminating data trends for investors. If you would like just a few more bullets, then skip to the end and read the “Bottom line for investors.”

An investor’s questions are, “How well does Potential Gross Domestic Product (GDP) measure what it says it measures – what an economy is capable of producing?” “Have dynamics changed over time in a way that isn’t fully reflected in today’s measure?” And, if so, “What is it really?”

To be on the same page, we start by clarifying “Potential GDP.”  It is not maximum or national emergency output. It is usually defined as the level of output (“real” or price-level adjusted) that can be sustained over time without fostering inflation (general price level from money, rather than from product supply and demand causes).

With this in mind, let’s consider the capital and labor capacity available and what that implies about potential production (GDP) today. 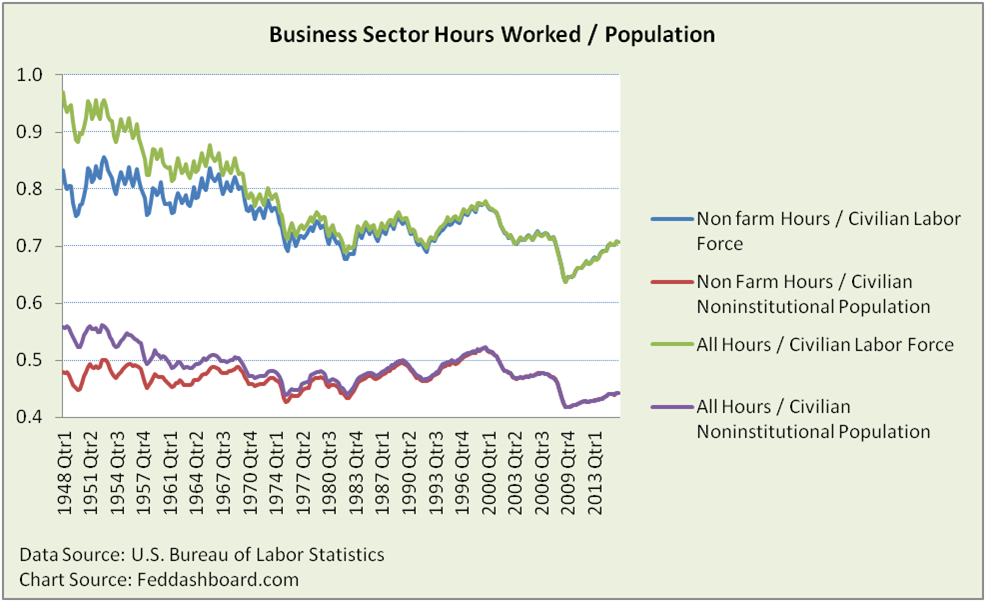 Physical Capital includes Structures, Equipment and Intellectual Property (IP) Products (including R&D, software and patents). Physical capital can be viewed similar to labor productivity, dividing output by each input. Pictured below is the current replacement cost of net stock; it’s a more basic view before assumptions are made about how the capital is used. As this is private capital data, the output is Private GDP (Business, Households and Nonprofits – excluding Government). 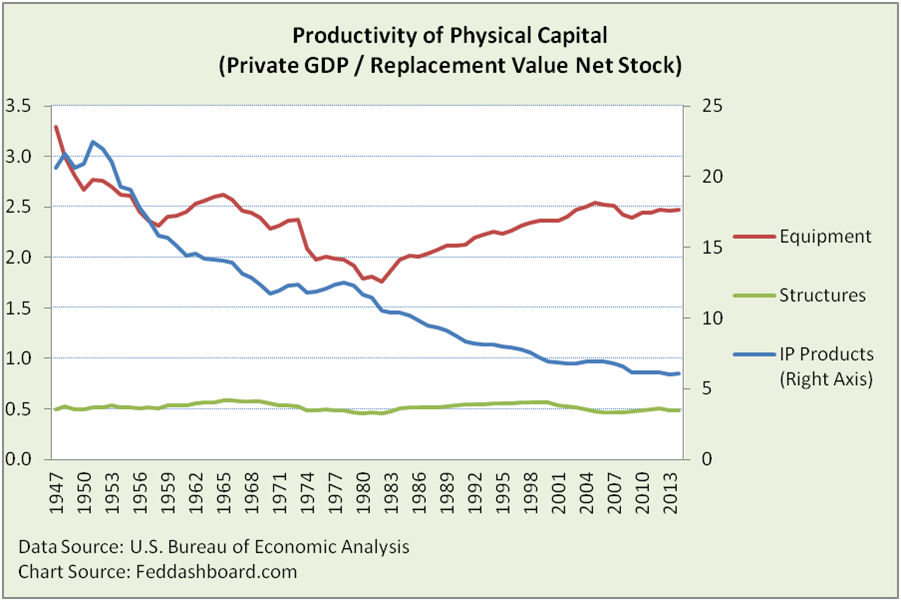 Another view emerges when physical capital is compared to hours worked. Here, Structures skyrocket as the ratio implies they are being used more “efficiently” per hour worked. In office buildings, this is observed in worker “hotel” or “bullpen” space, or work-at-home rather than individual offices. In manufacturing it is smaller footprint manufacturing, often with smaller equipment and less inventory storage. 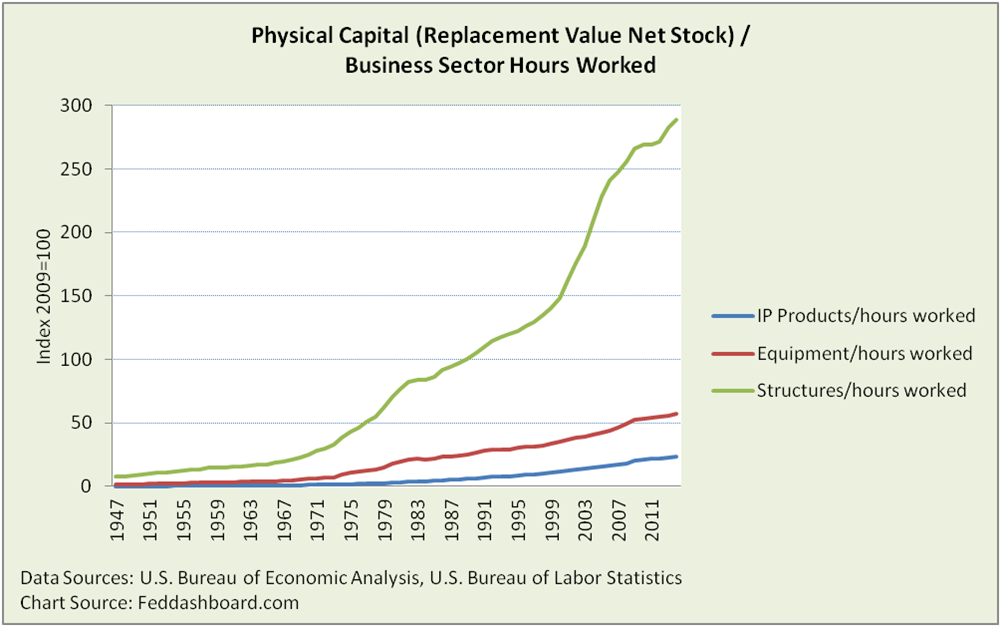 To make changes more clear for nonresidential structures and equipment, we flip the view to quarterly investment additions relative to Private GDP. Structures have been on a downtrend since the 1970s when manufacturing peaked. 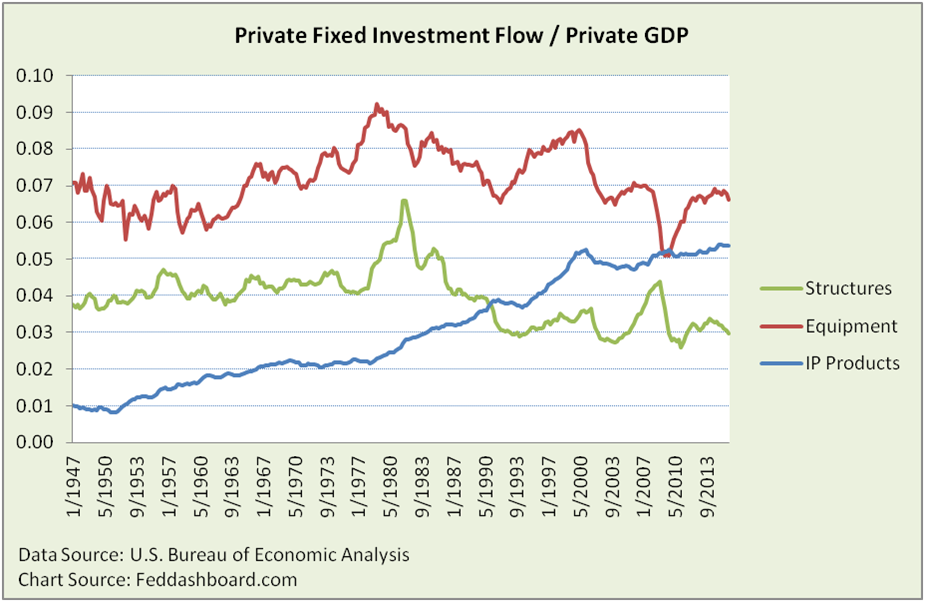 Less physical capital has been needed to produce than in past. This includes shift in industry composition and country sourcing. For Structures, the real fixed investment (not shown) has been flat since the mid 1970s with peaks in 1981, 1985, 2000 and 2008 – each about 20% higher than current levels. Higher investment in the past both reflects the need for less physical capital and points to higher potential production today.

Given these tangible changes, why isn’t Potential GDP higher?

Mystery revealed in measurement of timing and productivity

Timing is about: 1) the look back time range and 2) the prediction period.

More broadly, remember the MFP math. These measures are “residuals” or growth not explained by labor, capital services or any other factor in the equation. Economists can get pretty complicated with their productivity math. But, the variables considered are rather simplistic compared to a typical Business School operations management case study. Being simplistic is a reason why these measures missed advances in management over the decades.

In short, because productivity is higher, potential production is higher.

Unemployment gap misses changes in labor “slack.” To find the Potential GDP trend to use in a prediction, the past “cycle” effects are removed from past GDP. Usually, this is done by using the gap between the current unemployment rate and long term natural rate of unemployment. But, this is complicated today. Why?

Wage and hours view of slack, debt deleveraging and lower research-to-retail prices reduce inflationary pressures. Potential GDP is capped by an estimate of how low unemployment can go without increasing inflation. The unemployment gap is calculated with a long term natural rate of unemployment (specifically, the Nonaccelerating Inflation Rate of Unemployment or “NAIRU”). The NAIRU depends largely on the Phillips curve relationship between inflation and unemployment rate.

Federal tax and spending adjustment is a debate. For investors referencing the U.S. Congressional Budget Office’s (CBO) estimate of Potential GDP, the CBO also incorporates predictions of policy effects. Thus, an investor will need to accept the CBO’s view or adjust with the investor’s own view.

Any investor using an approach with a significant weight on the Potential GDP factor should decrease that weight or shift to another strategy.