Trending
You are at:Home»Asia»Good news: the Japanese economy is healthier – time to make babies

The latest estimate of 4Q2016 household consumption reports shoppers bought more durable goods as prices fell and fewer semi-durables and non-durables as those prices rose – the opposite of what the Bank of Japan (BoJ) expected.

The “textbook” price-quantity chart with each axis the same makes it easy to see the dramatic fall in consumer durable prices. 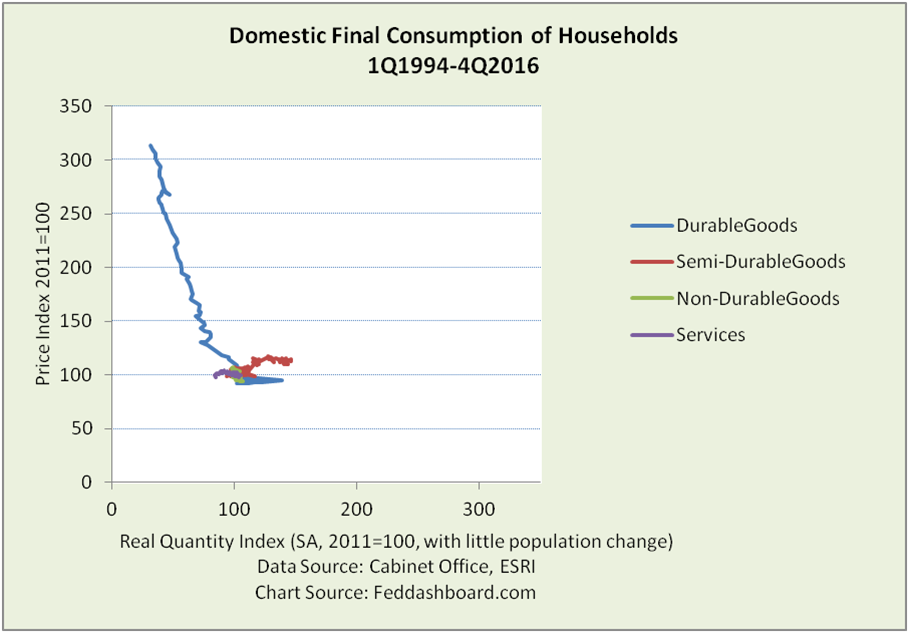 The dramatic price drop in consumer durables is especially notable as the global price drop in durables started with Japanese audio and video equipment in the mid-1970s. As we’ve discussed previously, over the past two decades, Japanese shoppers have been stronger buyers of durables than U.S. shoppers, although stronger in some years than others. More, Japanese consumers bought more while paying down debt from 1997 to 2012, while U.S. shoppers increased debt.

To see the other category indices more clearly, the chart below zooms in. 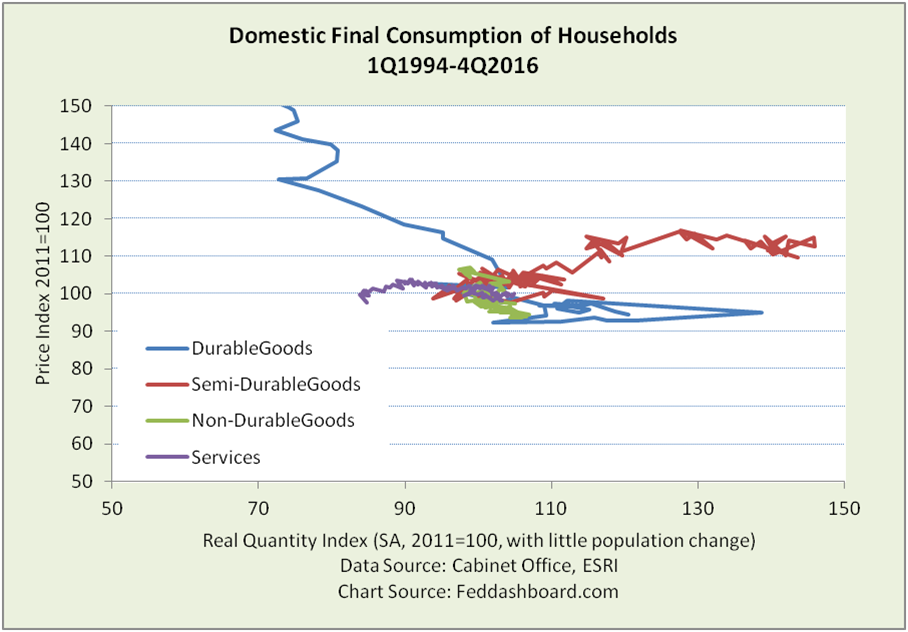 By contrast, semi-durables contracted hard before a small rebound to 1Q2014 and then fell back. Non-durables fluctuated more narrowly.

Combining the four purchase categories, purchases have been growing as illustrated in the zoomed-in picture below. 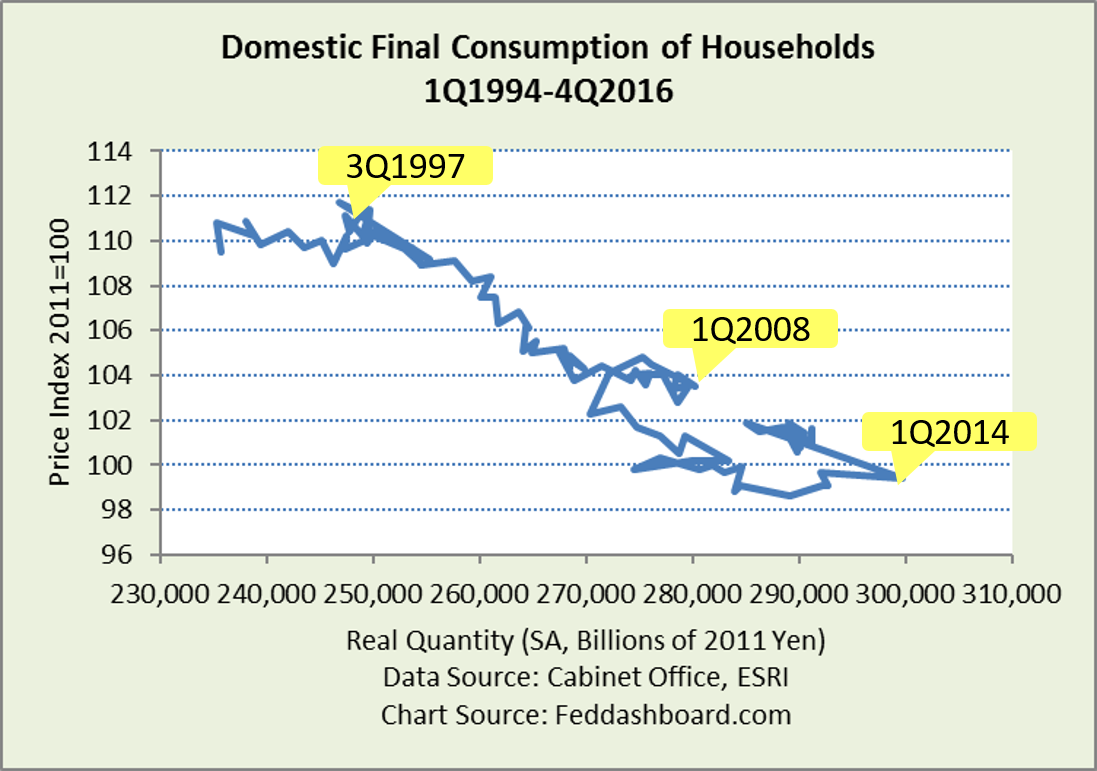 Notice the “fishhook” pattern. No goods category, nor the combined total, has recovered to its 4Q2013 level before the consumption tax increase and QE.

A simplified view of cumulative change is seen in the bar chart below. It starts in 1997 as that is when the average price of all household consumption began to fall and shoppers dramatically increased purchases of durables. The chart also compares the cumulative change from the update to the most recent System of National Accounts methods, recently implemented through the good work of Japan’s national accounting body the Economic and Social Research Institute (ESRI).

First, quantity purchased – the growth in durables was far greater than change in any other category. 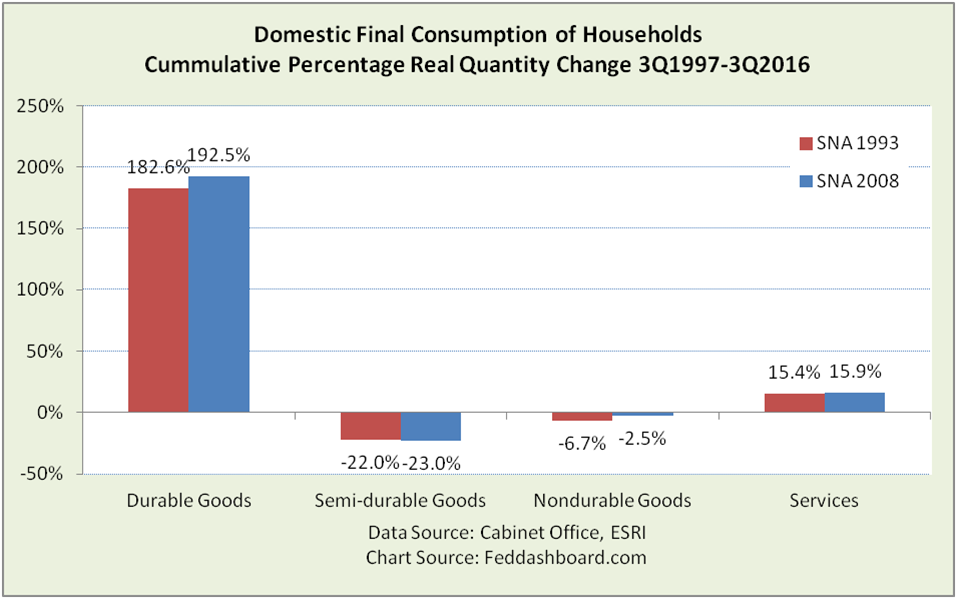 Second, price — the fall in durables prices is as dramatic as its increase in purchases. 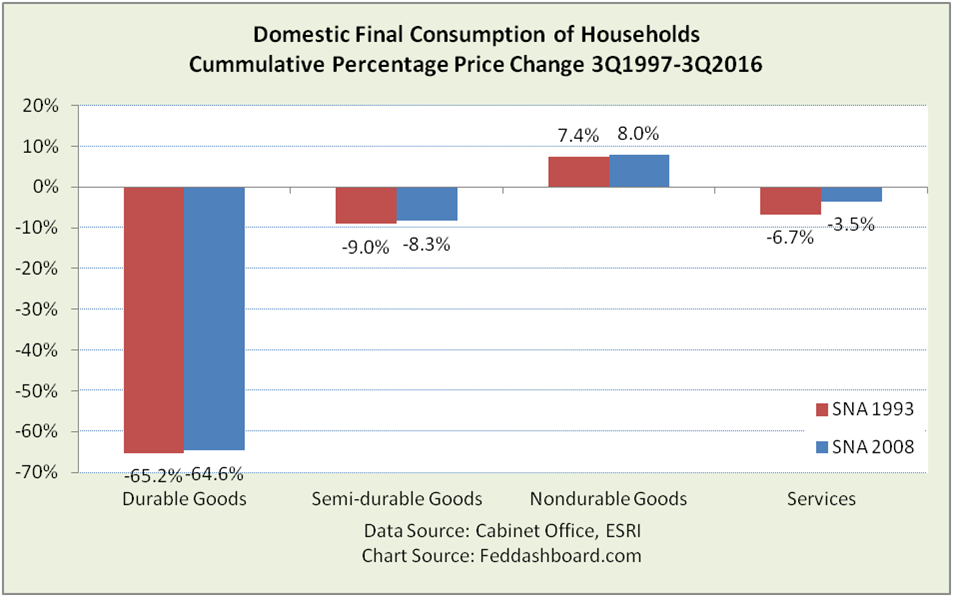 In sum, average overall shopping has been strong. Yes, clothing purchases cratered, but a need is for more babies – and maybe Japanese innovation in digital fashion.

Consumer reality running counter to BoJ expectations is not new. We’ve described this previously in “How Japanese shoppers surprised the BoJ – again.” A danger is that a consumer reality that runs counter to BoJ expectations could spread public distrust of financial institutions (other than the postal bank) to the BoJ and then Government. Currently high public trust in the Government is an advantage enjoyed by PM Abe, unlike any of his global peers.

Thanks to Brett Creech at the U.S. Bureau of Labor Statistics for his suggestion to use the Japanese Expenditure survey, see his recent “Beyond the Numbers” article.