Trending
You are at:Home»Asia»Central bankers: time to learn from political analysts

Donald Trump and Bernie Saunders forced political analysts to revise polling methods and look fresh for messages in the data. As one analyst phrased it in the Washington Post, “I feel like in some ways my brain has to think differently than it ever has.” Central bankers could learn from the openness of political analysts to new data.

The European Central Bank, U.S. Federal Reserve and Bank of Japan continue to be surprised by unexpected policy results. For example:

These aren’t surprises to regular people but they are to central bankers. Why?

These assumptions are from a world where goods scarcity and increasing costs dominate. Are we living in that world?

Simply put, it costs less to make stuff – especially globally traded goods. Notably, “research-to-retail” product costs have fallen. Why does this matter? Because it reflects the growing importance of value chains, beyond individual factories. Here’s another data twist, economic data averages don’t highlight these value chains because they vary by companies within industry sectors. To see more clearly, analysts need to use data from public company reporting. A related change is that productivity — the way people commonly describe it – hasn’t fallen the way formal measurements suggest.

To see how purchases grew when prices fell, let’s take a tour of the latest data…

The Euro Area total purchases were fractionally down since 2008, despite QE pushing up prices 5.9%.

Higher prices hurt purchases – common sense to shoppers, but a shock to central bankers who expect higher prices to cause consumers to buy more. But people know a good deal when they see it. In stark contrast to the total, sensitive durable categories showed a different story – purchases grew as prices fell. Of course, products vary by country depending on regulatory policy, import dynamics and more. 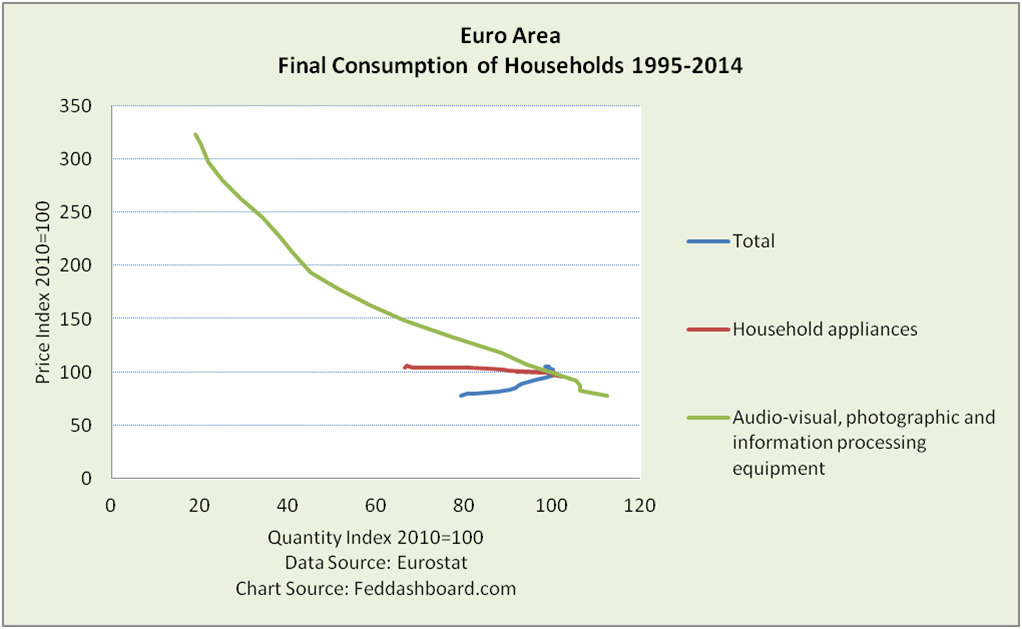 Japan’s nominal retail sales were down 0.5% compared to a year ago. Retail sales were saved by stronger auto, and medicine and toiletries sales – all other categories down. 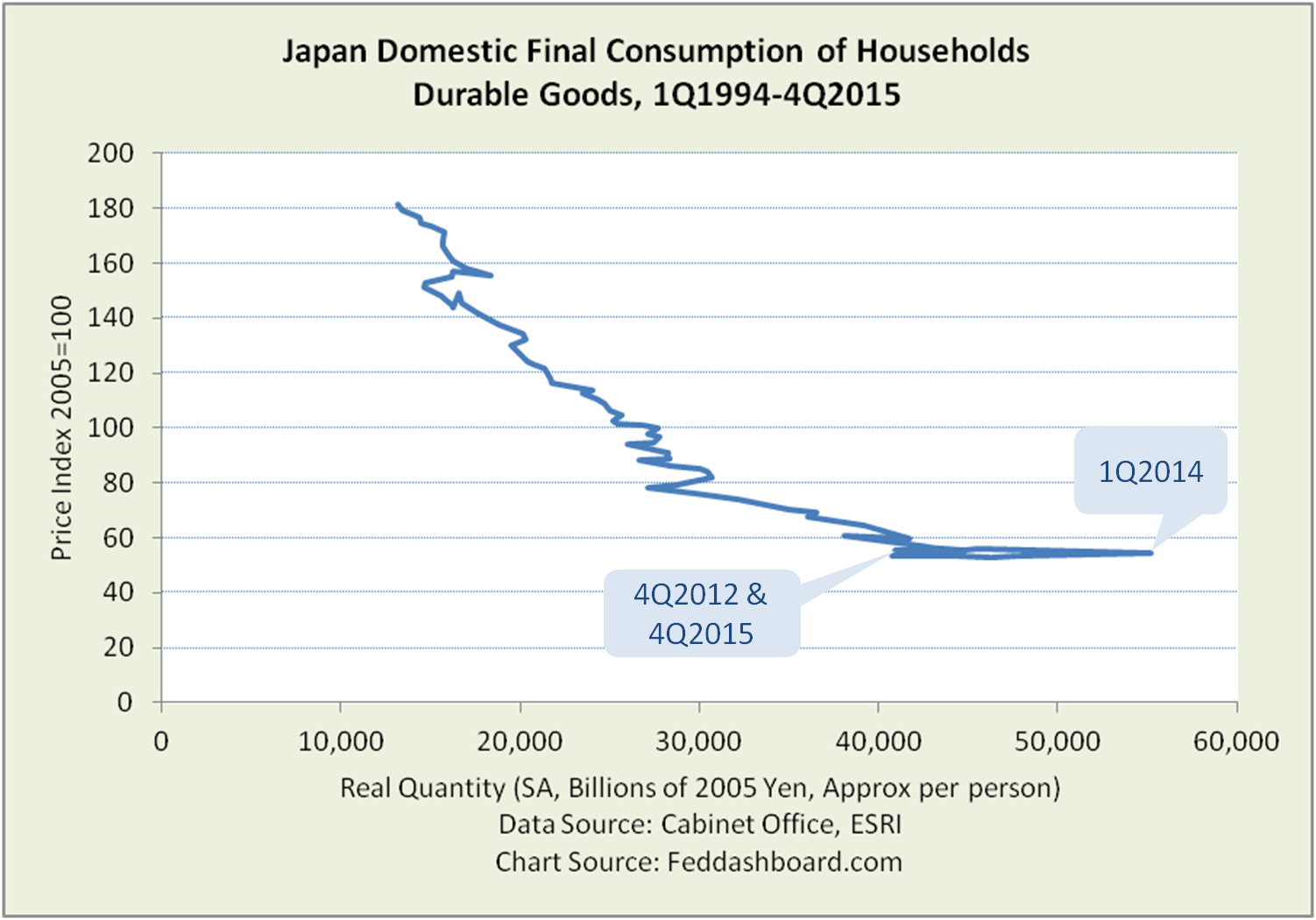 Yet, prices aren’t falling as fast as before the credit bubble burst. The decrease in price relative to increase in purchases from 2009-2015 was about half the pace of 1995-2007. To the extent the Federal Open Market Committee (FOMC) pushed up prices with QE, this must also be considered in harm to purchases. 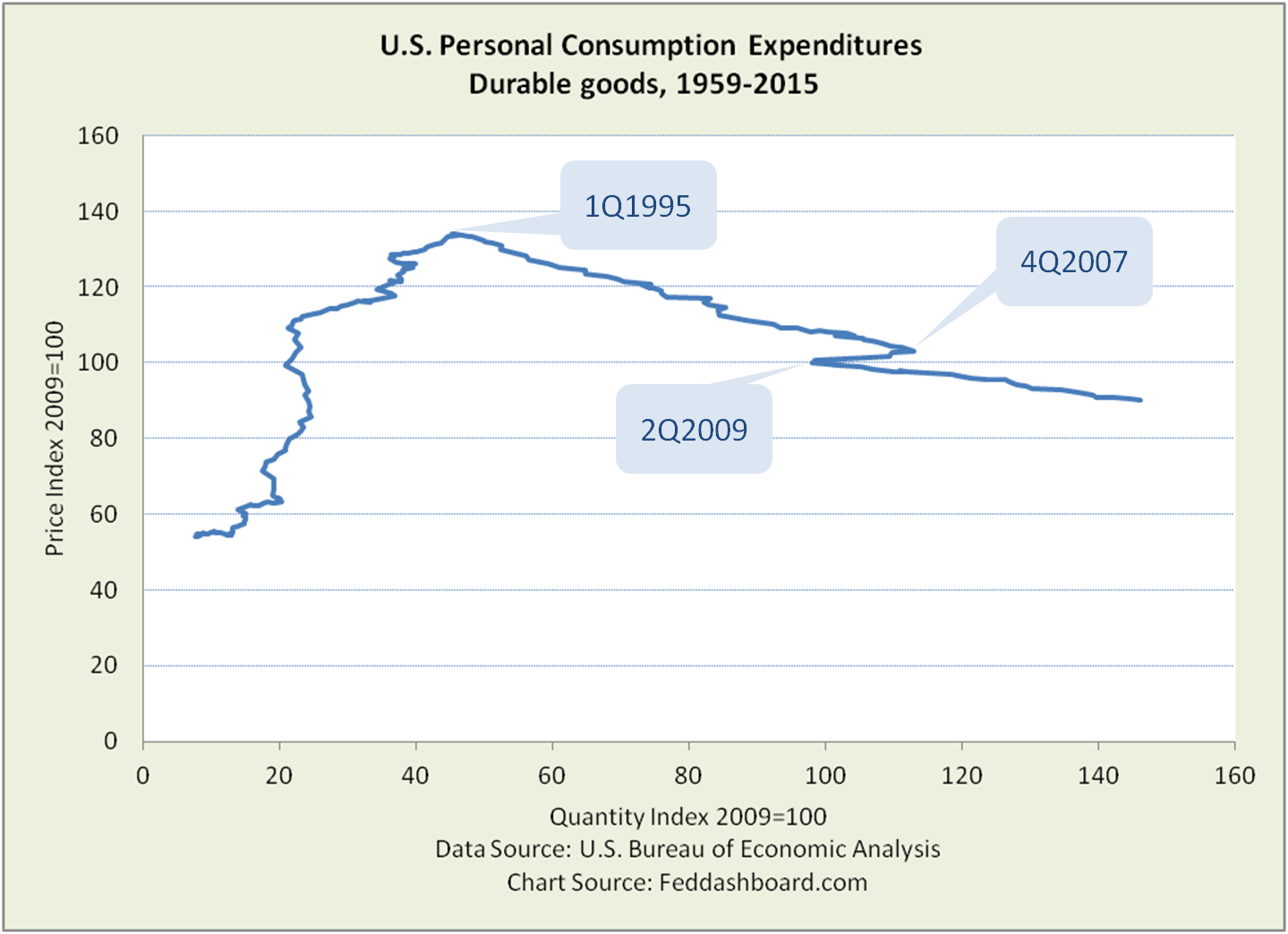 For a view by product types, see European, U.S. and Japanese analyses.